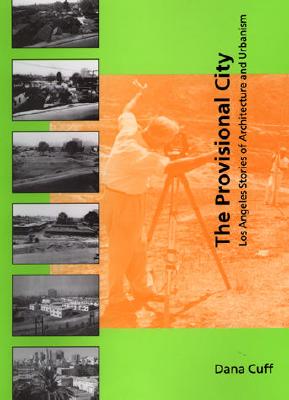 How the modern city is formed through an endless cycle of upheavals, demolition, and debate.

The provisional city is one of constant erasure and eruption. Through what Dana Cuff calls a "convulsive urban act," developers both public and private demolish an urban site and disband its inhabitants, replacing it with some vision of a better life that leaves no trace of the former structure. Architects bring their own utopian dreams to the process. In this book, Cuff examines those convulsions through two underestimated dimensions of architectural and urban form: scale and the politics of property. Scale is intimately tied to degree of disruption: the larger a project's scale, the greater the upheaval. As both culture and geography, real estate plays an equally significant role in urban formation. Focusing on Los Angeles, Cuff looks at urban transformation through the architecture and land development of large-scale residential projects. She demonstrates the inherent instability of very large sites. Having created perverse renditions of the very problems they sought to solve, for example, public housing projects that underwent upheaval in the 1940s and 1950s are doing so again. Cuff explores five cases that span the period from the 1930s, when federal support for slum clearance and public housing caused convulsions near downtown, to a huge 1990s' mixed-use development on one of Los Angeles's last remaining wetlands. The story takes us from the refined modernist architecture of Richard Neutra to the self-conscious populism of the New Urbanism. The cases illuminate the relationship of housing architecture to issues of race, class, urban design, geography, and political ideology.

Dana Cuff is Professor of Architecture and Urban Design at the University of California, Los Angeles, and a principal of the consulting firm Community Design Associates.
or
Not Currently Available for Direct Purchase
Copyright © 2020 American Booksellers Association