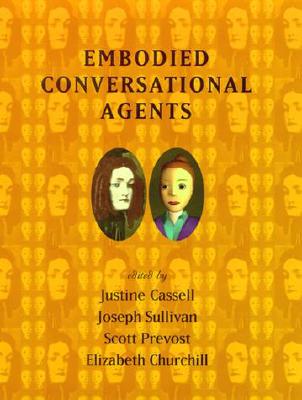 This book describes research in all aspects of the design, implementation, and evaluation of embodied conversational agents as well as details of specific working systems.

Embodied conversational agents are computer-generated cartoonlike characters that demonstrate many of the same properties as humans in face-to-face conversation, including the ability to produce and respond to verbal and nonverbal communication. They constitute a type of (a) multimodal interface where the modalities are those natural to human conversation: speech, facial displays, hand gestures, and body stance; (b) software agent, insofar as they represent the computer in an interaction with a human or represent their human users in a computational environment (as avatars, for example); and (c) dialogue system where both verbal and nonverbal devices advance and regulate the dialogue between the user and the computer. With an embodied conversational agent, the visual dimension of interacting with an animated character on a screen plays an intrinsic role. Not just pretty pictures, the graphics display visual features of conversation in the same way that the face and hands do in face-to-face conversation among humans. This book describes research in all aspects of the design, implementation, and evaluation of embodied conversational agents as well as details of specific working systems. Many of the chapters are written by multidisciplinary teams of psychologists, linguists, computer scientists, artists, and researchers in interface design. The authors include Elisabeth Andre, Norm Badler, Gene Ball, Justine Cassell, Elizabeth Churchill, James Lester, Dominic Massaro, Cliff Nass, Sharon Oviatt, Isabella Poggi, Jeff Rickel, and Greg Sanders.

Elizabeth F. Churchill is a Principal Research Scientist at Yahoo! Research in Santa Clara, CA.
Loading...
or
Not Currently Available for Direct Purchase