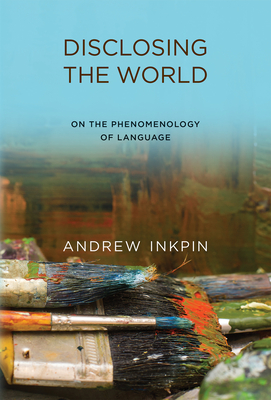 On the Phenomenology of Language

A phenomenological conception of language, drawing on Heidegger, Merleau-Ponty, and Wittgenstein, with implications for both the philosophy of language and current cognitive science.

In this book, Andrew Inkpin considers the disclosive function of language--what language does in revealing or disclosing the world. His approach to this question is a phenomenological one, centering on the need to accord with the various experiences speakers can have of language. With this aim in mind, he develops a phenomenological conception of language with important implications for both the philosophy of language and recent work in the embodied-embedded-enactive-extended (4e) tradition of cognitive science.

Inkpin draws extensively on the work of Martin Heidegger, Maurice Merleau-Ponty, and Ludwig Wittgenstein, showing how their respective conceptions of language can be combined to complement each other within a unified view. From the early Heidegger, Inkpin extracts a basic framework for a phenomenological conception of language, comprising both a general picture of the role of language and a specific model of the function of words. Merleau-Ponty's views are used to explicate the generic "pointing out"--or presentational--function of linguistic signs in more detail, while the late Wittgenstein is interpreted as providing versatile means to describe their many pragmatic uses. Having developed this unified phenomenological view, Inkpin explores its broader significance. He argues that it goes beyond the conventional realism/idealism opposition, that it challenges standard assumptions in mainstream post-Fregean philosophy of language, and that it makes a significant contribution not only to the philosophical understanding of language but also to 4e cognitive science.