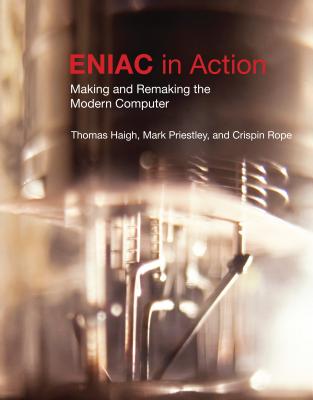 Making and Remaking the Modern Computer (History of Computing)

The history of the first programmable electronic computer, from its conception, construction, and use to its afterlife as a part of computing folklore.

Conceived in 1943, completed in 1945, and decommissioned in 1955, ENIAC (the Electronic Numerical Integrator and Computer) was the first general-purpose programmable electronic computer. But ENIAC was more than just a milestone on the road to the modern computer. During its decade of operational life, ENIAC calculated sines and cosines and tested for statistical outliers, plotted the trajectories of bombs and shells, and ran the first numerical weather simulations. ENIAC in Action tells the whole story for the first time, from ENIAC's design, construction, testing, and use to its afterlife as part of computing folklore. It highlights the complex relationship of ENIAC and its designers to the revolutionary approaches to computer architecture and coding first documented by John von Neumann in 1945.

Within this broad sweep, the authors emphasize the crucial but previously neglected years of 1947 to 1948, when ENIAC was reconfigured to run what the authors claim was the first modern computer program to be executed: a simulation of atomic fission for Los Alamos researchers. The authors view ENIAC from diverse perspectives--as a machine of war, as the "first computer," as a material artifact constantly remade by its users, and as a subject of (contradictory) historical narratives. They integrate the history of the machine and its applications, describing the mathematicians, scientists, and engineers who proposed and designed ENIAC as well as the men--and particularly the women who--built, programmed, and operated it.