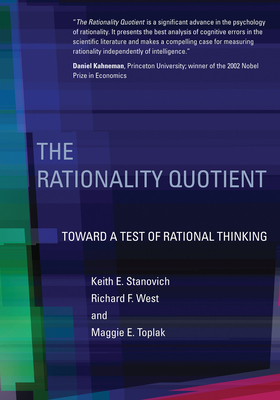 Toward a Test of Rational Thinking

How to assess critical aspects of cognitive functioning that are not measured by IQ tests: rational thinking skills.

Why are we surprised when smart people act foolishly? Smart people do foolish things all the time. Misjudgments and bad decisions by highly educated bankers and money managers, for example, brought us the financial crisis of 2008. Smart people do foolish things because intelligence is not the same as the capacity for rational thinking. The Rationality Quotient explains that these two traits, often (and incorrectly) thought of as one, refer to different cognitive functions. The standard IQ test, the authors argue, doesn't measure any of the broad components of rationality--adaptive responding, good judgment, and good decision making.

The authors show that rational thinking, like intelligence, is a measurable cognitive competence. Drawing on theoretical work and empirical research from the last two decades, they present the first prototype for an assessment of rational thinking analogous to the IQ test: the CART (Comprehensive Assessment of Rational Thinking).

The authors describe the theoretical underpinnings of the CART, distinguishing the algorithmic mind from the reflective mind. They discuss the logic of the tasks used to measure cognitive biases, and they develop a unique typology of thinking errors. The Rationality Quotient explains the components of rational thought assessed by the CART, including probabilistic and scientific reasoning; the avoidance of "miserly" information processing; and the knowledge structures needed for rational thinking. Finally, the authors discuss studies of the CART and the social and practical implications of such a test. An appendix offers sample items from the test.