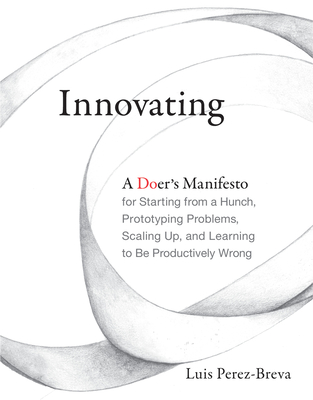 A Doer's Manifesto for Starting from a Hunch, Prototyping Problems, Scaling Up, and Learning to Be Productively Wrong

Innovating is for doers: you don't need to wait for an earth-shattering idea, but can build one with a hunch and scale it up to impact.

Innovation is the subject of countless books and courses, but there's very little out there about how you actually innovate. Innovation and entrepreneurship are not one and the same, although aspiring innovators often think of them that way. They are told to get an idea and a team and to build a show-and-tell for potential investors. In Innovating, Luis Perez-Breva describes another approach--a doer's approach developed over a decade at MIT and internationally in workshops, classes, and companies. He shows that to start innovating it doesn't require an earth-shattering idea; all it takes is a hunch. Anyone can do it. By prototyping a problem and learning by being wrong, innovating can be scaled up to make an impact. As Perez-Breva demonstrates, no thing is new at the outset of what we only later celebrate as innovation.

In Innovating, the process--illustrated by unique and dynamic artwork--is shown to be empirical, experimental, nonlinear, and incremental. You give your hunch the structure of a problem. Anything can be a part. Your innovating accrues other people's knowledge and skills. Perez-Breva describes how to create a kit for innovating, and outlines questions that will help you think in new ways. Finally, he shows how to systematize what you've learned: to advocate, communicate, scale up, manage innovating continuously, and document--"you need a notebook to converse with yourself," he advises. Everyone interested in innovating also needs to read this book.

Luis Perez-Breva, an innovator and entrepreneur, is a Lecturer and a Research Scientist at MIT's School of Engineering and the originator and Lead Instructor of the MIT Innovation Teams Program.
Loading...
or
Not Currently Available for Direct Purchase