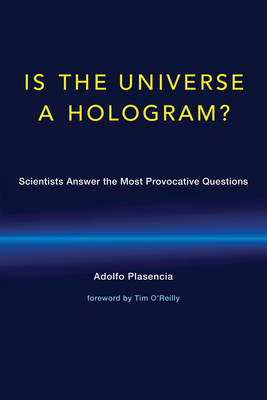 Is the Universe a Hologram?

Scientists Answer the Most Provocative Questions

Questions about the physical world, the mind, and technology in conversations that reveal a rich seam of interacting ideas.

Science today is more a process of collaboration than moments of individual “eurekas.” This book recreates that kind of synergy by offering a series of interconnected dialogues with leading scientists who are asked to reflect on key questions and concepts about the physical world, technology, and the mind. These thinkers offer both specific observations and broader comments about the intellectual traditions that inform these questions; doing so, they reveal a rich seam of interacting ideas.

The persistent paradox of our era is that in a world of unprecedented access to information, many of the most important questions remain unsolved. These conversations (conducted by a veteran science writer, Adolfo Plasencia) reflect this, with scientists addressing such issues as intelligence, consciousness, global warming, energy, technology, matter, the possibility of another earth, changing the past, and even the philosophical curveball, “is the universe a hologram?”

The dialogues discuss such fascinating aspects of the physical world as the function of the quantum bit, the primordial cosmology of the universe, and the wisdom of hewn stones. They offer optimistic but reasoned views of technology, considering convergence culture, algorithms, “Beauty ≠ Truth,” the hacker ethic, AI, and other topics. And they offer perspectives from a range of disciplines on intelligence, discussing subjects that include the neurophysiology of the brain, affective computing, collaborative innovation, and the wisdom of crowds.

Adolfo Plasencia, a blogger, writer, and columnist on science and technology, hosted the Spanish television program Tecnópolis for more than six years. With his colleague Douglas Morgenstern, he cofounded the MITUPV Exchange, a joint initiative of MIT and the Polytechnic University of Valencia (UPV).

Henry Jenkins is Provost's Professor of Communication, Journalism and Cinematic Arts at the Annenberg School for Communication, University of Southern California. He is the coeditor of From Barbie to Mortal Kombat: Gender and Computer Games (MIT Press, 1998).

Hal Abelson is Class of 1922 Professor of Computer Science and Engineering at Massachusetts Institute of Technology and a fellow of the IEEE. He is a founding director of Creative Commons, Public Knowledge, and the Free Software Foundation. Additionally, he serves as co-chair for the MIT Council on Educational Technology.

Alvaro Pascual-Leone is Director of Research at the Behavioral Neurology Unit of Beth Israel Deaconess Medical Center and Associate Professor of Neurology at Harvard Medical School.

Paul Osterman is Professor of Human Resources and Management at the MIT Sloan School of Management and the coeditor of Working in America: A Blueprint for the New Labor Market.

Howard Rheingold, an influential writer and thinker on social media, is the author of Tools for Thought: The History and Future of Mind-Expanding Technology, The Virtual Community: Homesteading on the Electronic Frontier (both published by the MIT Press), and Smart Mobs: The Next Social Revolution.
Loading...
or support indie stores by buying on