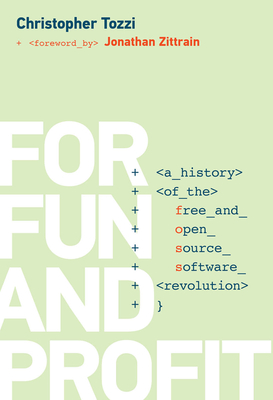 For Fun and Profit

The free and open source software movement, from its origins in hacker culture, through the development of GNU and Linux, to its commercial use today.

In the 1980s, there was a revolution with far-reaching consequences—a revolution to restore software freedom. In the early 1980s, after decades of making source code available with programs, most programmers ceased sharing code freely. A band of revolutionaries, self-described “hackers,” challenged this new norm by building operating systems with source code that could be freely shared. In For Fun and Profit, Christopher Tozzi offers an account of the free and open source software (FOSS) revolution, from its origins as an obscure, marginal effort by a small group of programmers to the widespread commercial use of open source software today. Tozzi explains FOSS's historical trajectory, shaped by eccentric personalities—including Richard Stallman and Linus Torvalds—and driven both by ideology and pragmatism, by fun and profit.

Tozzi examines hacker culture and its influence on the Unix operating system, the reaction to Unix's commercialization, and the history of early Linux development. He describes the commercial boom that followed, when companies invested billions of dollars in products using FOSS operating systems; the subsequent tensions within the FOSS movement; and the battles with closed source software companies (especially Microsoft) that saw FOSS as a threat. Finally, Tozzi describes FOSS's current dominance in embedded computing, mobile devices, and the cloud, as well as its cultural and intellectual influence.

Christopher Tozzi is Assistant Professor of History at Howard University and a freelance writer. He is the author of Nationalizing France's Army: Foreign, Black, and Jewish Troops in the French Military, 1715–1831.

Jonathan Zittrain is Professor of Law at Harvard Law School, where he cofounded the Berkman Center for Internet and Society, and Professor of Computer Science at Harvard's School of Engineering and Applied Sciences. He is the author of The Future of the Internet--And How to Stop It.
Loading...
or
Not Currently Available for Direct Purchase