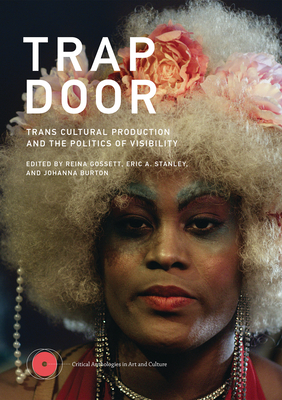 The increasing representation of trans identity throughout art and popular culture in recent years has been nothing if not paradoxical. Trans visibility is touted as a sign of a liberal society, but it has coincided with a political moment marked both by heightened violence against trans people (especially trans women of color) and by the suppression of trans rights under civil law. Trap Door grapples with these contradictions.

The essays, conversations, and dossiers gathered here delve into themes as wide-ranging yet interconnected as beauty, performativity, activism, and police brutality. Collectively, they attest to how trans people are frequently offered “doors”—entrances to visibility and recognition—that are actually “traps,” accommodating trans bodies and communities only insofar as they cooperate with dominant norms. The volume speculates about a third term, perhaps uniquely suited for our time: the trapdoor, neither entrance nor exit, but a secret passageway leading elsewhere. Trap Door begins a conversation that extends through and beyond trans culture, showing how these issues have relevance for anyone invested in the ethics of visual culture.


Praise For Trap Door: Trans Cultural Production and the Politics of Visibility (Critical Anthologies in Art and Culture)…

As someone who has spent her life seeking reflections of myself in visual and print media, this anthology by my dear friend Reina Gossett was a salve, helping me unpack the images I've taken in of myself as a trans woman — and the ones I am creating through my own writings and Pose.—Sarah Karlan, BuzzFeed—

The texts collected here chart new ways to tell our stories, to represent ourselves, our art, our archives, and our futures.

Trap Door is an essential tome that focuses loosely on work by trans-identified artists and the paradoxes inherent within it. The book is “resistant to the canonization of trans art,” as its editors note in an introduction, and the writings and interviews included in an expansive anthology—showcasing figures such as Chris E. Vargas, Geo Wyeth, Wu Tsang, Park McArthur, and Constantina Zavitsanos—provide valuable ways of redefining what a canon might entail.

Reina Gossett is an artist, activist, and 2017 Activist in Residence at the Barnard Center for Research on Women. She directed The Personal Things (2016) and, with Sasha Wortzel, wrote, directed, and produced Happy Birthday, Marsha! (2017), a short film about legendary performer and activist Marsha P. Johnson.

Eric A. Stanley is Assistant Professor in the Department of Gender and Sexuality Studies at the University of California, Riverside, editor of Captive Genders: Trans Embodiment and the Prison Industrial Complex, and, with Chris E. Vargas, director of the films Homotopia (2006) and Criminal Queers (2016).

Johanna Burton is Keith Haring Director and Curator of Education and Public Engagement at the New Museum in New York and the series editor for the Critical Anthologies in Art and Culture.
Loading...
or
Not Currently Available for Direct Purchase