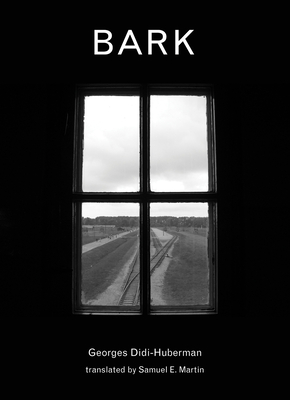 A noted French thinker's poignant reflections, in words and photographs, on his visit to Auschwitz-Birkenau.

On a visit to Auschwitz-Birkenau, Georges Didi-Huberman tears three pieces of bark from birch trees on the edge of the site. Looking at these pieces after his return home, he sees them as letters, a flood, a path, time, memory, flesh. The bark serves as a springboard to Didi-Huberman's meditations on his visit, recorded in this spare, poetic, and powerful book. Bark is a personal account, drawing not on the theoretical apparatus of scholarship but on Didi-Huberman's own history, memory, and knowledge.

The text proceeds as a series of reflections, accompanied by Didi-Huberman's photographs of the visit. The photographs are not meant to be art—Didi-Huberman confesses that he “photographed practically everything without looking”—but approach it nevertheless. Didi-Huberman tells us that his grandparents died at Auschwitz, but his account is more universal than biographical. As he walks from place to place, he observes that in German birches are birken; Birkenau designates the meadow where the birches grow. Didi-Huberman sees and photographs the “reconstructed” execution wall; the floors of the crematorium, forgotten witnesses to killing; and the birch trees, lovely but also resembling prison bars. Taking his own photographs, he thinks of the famous photographs taken in 1944 by a member of the Sonderkommando, the only photographic documentation of the camp before the Germans destroyed it, hoping to hide the evidence of their crimes. Didi-Huberman notices a “bizarre proliferation of white flowers on the exact spot of the cremation pits.” The dead are not departed.

Bark is a slim, poignant, controlled narrative, yet is presented as an irrepressible and unpremeditated stream of writing.—Guylaine Massoutre, Le Devoir—

Georges Didi-Huberman, a philosopher and art historian based in Paris, teaches at the École des Hautes Études en Sciences Sociales. Recipient of the 2015 Adorno Prize, he is the author of more than fifty books on the history and theory of images, including Invention of Hysteria: Charcot and the Photographic Iconography of the Salpêtrière (MIT Press), Bark (MIT Press), Images in Spite of All: Four Photographs from Auschwitz, and The Surviving Image: Phantoms of Time and Time of Phantoms: Aby Warburg's History of Art.

Samuel E. Martin teaches French at the University of Pennsylvania
Loading...
or
Not Currently Available for Direct Purchase