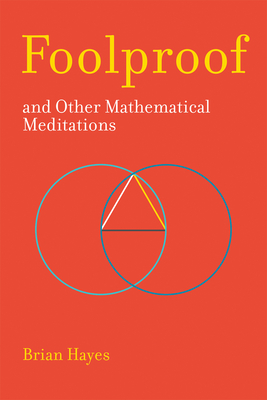 Foolproof, and Other Mathematical Meditations

A non-mathematician explores mathematical terrain, reporting accessibly and engagingly on topics from Sudoku to probability.

Brian Hayes wants to convince us that mathematics is too important and too much fun to be left to the mathematicians. Foolproof, and Other Mathematical Meditations is his entertaining and accessible exploration of mathematical terrain both far-flung and nearby, bringing readers tidings of mathematical topics from Markov chains to Sudoku. Hayes, a non-mathematician, argues that mathematics is not only an essential tool for understanding the world but also a world unto itself, filled with objects and patterns that transcend earthly reality. In a series of essays, Hayes sets off to explore this exotic terrain, and takes the reader with him.

Math has a bad reputation: dull, difficult, detached from daily life. As a talking Barbie doll opined, "Math class is tough." But Hayes makes math seem fun. Whether he's tracing the genealogy of a well-worn anecdote about a famous mathematical prodigy, or speculating about what would happen to a lost ball in the nth dimension, or explaining that there are such things as quasirandom numbers, Hayes wants readers to share his enthusiasm. That's why he imagines a cinematic treatment of the discovery of the Riemann zeta function ("The year: 1972. The scene: Afternoon tea in Fuld Hall at the Institute for Advanced Study in Princeton, New Jersey"), explains that there is math in Sudoku after all, and describes better-than-average averages. Even when some of these essays involve a hike up the learning curve, the view from the top is worth it.