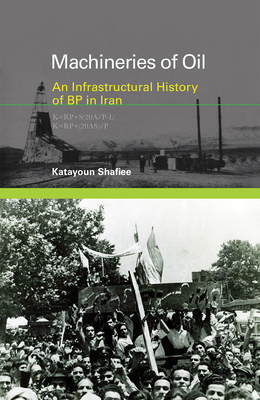 The emergence of the international oil corporation as a political actor in the twentieth century, seen in BP's infrastructure and information arrangements in Iran.

In the early twentieth century, international oil corporations emerged as a new kind of political actor. The development of the world oil industry, argues Katayoun Shafiee, was one of the era's largest political projects of techno-economic development. In this book, Shafiee maps the machinery of oil operations in the Anglo-Iranian oil industry between 1901 and 1954, tracking the organizational work involved in moving oil through a variety of technical, legal, scientific, and administrative networks. She shows that, in a series of disagreements, the British-controlled Anglo-Iranian Oil Company (AIOC, which later became BP) relied on various forms of information management to transform political disputes into techno-economic calculation, guaranteeing the company complete control over profits, labor, and production regimes. She argues that the building of alliances and connections that constituted Anglo-Iranian oil's infrastructure reconfigured local politics of oil regions and examines how these arrangements in turn shaped the emergence of both nation-state and transnational oil corporation.

Drawing on her extensive archival and field research in Iran, Shafiee investigates the surprising ways in which nature, technology, and politics came together in battles over mineral rights; standardizing petroleum expertise; formulas for calculating profits, production rates, and labor; the “Persianization” of employees; nationalism and oil nationalization; and the long-distance machinery of an international corporation. Her account shows that the politics of oil cannot be understood in isolation from its technical dimensions.

Katayoun Shafiee is Assistant Professor in the History Department at the University of Warwick.
Loading...
or
Not Currently Available for Direct Purchase