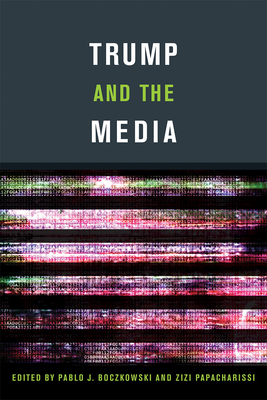 Trump and the Media

The election of Donald Trump and the great disruption in the news and social media.

Donald Trump's election as the 45th President of the United States came as something of a surprise--to many analysts, journalists, and voters. The New York Times's The Upshot gave Hillary Clinton an 85 percent chance of winning the White House even as the returns began to come in. What happened? And what role did the news and social media play in the election? In Trump and the Media, journalism and technology experts grapple with these questions in a series of short, thought-provoking essays. Considering the disruption of the media landscape, the disconnect between many voters and the established news outlets, the emergence of fake news and "alternative facts," and Trump's own use of social media, these essays provide a window onto broader transformations in the relationship between information and politics in the twenty-first century.

The contributors find historical roots to current events in Cold War notions of us versus them, trace the genealogy of the assault on facts, and chart the collapse of traditional news gatekeepers. They consider such topics as Trump's tweets (diagnosed by one writer as "Twitterosis") and the constant media exposure given to Trump during the campaign. They propose photojournalists as visual fact checkers ("lessons of the paparazzi") and debate whether Trump's administration is authoritarian or just authoritarian-like. Finally, they consider future strategies for the news and social media to improve the quality of democratic life.

Pablo J. Boczkowski is Professor in the Department of Communication Studies at Northwestern University. He is the author of Digitizing the News: Innovation in Online Newspapers, coauthor of The News Gap: When the Information Preferences of the Media and the Public Diverge, and coeditor of Remaking the News: Essays on the Future of Journalism Scholarship in the Digital Age (all published by the MIT Press). Zizi Papacharissi is Professor and Head of the Communication Department and Professor of Political Science at the University of Illinois at Chicago. She is the author and editor of nine books, including A Private Sphere: Democracy in a Digital Age, Affective Publics: Sentiment, Technology and Politics, and the Networked Self series.
Loading...
or support indie stores by buying on