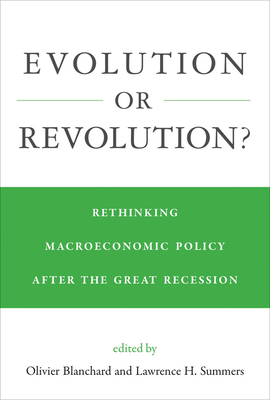 Leading economists discuss post–financial crisis policy dilemmas, including the dangers of complacency in a period of relative stability.

The Great Depression led to the Keynesian revolution and dramatic shifts in macroeconomic theory and macroeconomic policy. Similarly, the stagflation of the 1970s led to the adoption of the natural rate hypothesis and to a major reassessment of the role of macroeconomic policy. Should the financial crisis and the Great Recession lead to yet another major reassessment, to another intellectual revolution?  Will it?  If so, what form should it, or will it, take? These are the questions taken up in this book, in a series of contributions by policymakers and academics.


Praise For Evolution or Revolution?: Rethinking Macroeconomic Policy after the Great Recession…

This thought-provoking and acccessible collection of reflections by economists, central bankers, and government officials explores how the unusual circumstances that have characterized the global economy since 2007 should change economists' understanding of macroeconomic policy.—Foreign Affairs—

Olivier Blanchard is C. Fred Bergsten Senior Fellow at the Peterson Institute for International Economics in Washington, DC. He was Chief Economist at the International Monetary Fund from 2008 to 2015.

Lawrence H. Summers is Charles W. Eliot Professor and President Emeritus at Harvard University. He served as Secretary of the Treasury in the Clinton administration and as Director of the National Economic Council in the Obama administration.
Loading...
or
Not Currently Available for Direct Purchase