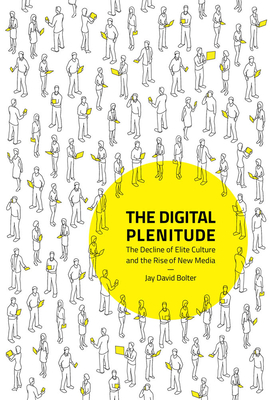 The Decline of Elite Culture and the Rise of New Media

How the creative abundance of today's media culture was made possible by the decline of elitism in the arts and the rise of digital media.

Media culture today encompasses a universe of forms—websites, video games, blogs, books, films, television and radio programs, magazines, and more—and a multitude of practices that include making, remixing, sharing, and critiquing. This multiplicity is so vast that it cannot be comprehended as a whole. In this book, Jay David Bolter traces the roots of our media multiverse to two developments in the second half of the twentieth century: the decline of elite art and the rise of digital media. Bolter explains that we no longer have a collective belief in “Culture with a capital C.” The hierarchies that ranked, for example, classical music as more important than pop, literary novels as more worthy than comic books, and television and movies as unserious have broken down. The art formerly known as high takes its place in the media plenitude. The elite culture of the twentieth century has left its mark on our current media landscape in the form of what Bolter calls “popular modernism.” Meanwhile, new forms of digital media have emerged and magnified these changes, offering new platforms for communication and expression.

Bolter outlines a series of dichotomies that characterize our current media culture: catharsis and flow, the continuous rhythm of digital experience; remix (fueled by the internet's vast resources for sampling and mixing) and originality; history (not replayable) and simulation (endlessly replayable); and social media and coherent politics.


Praise For The Digital Plenitude: The Decline of Elite Culture and the Rise of New Media…

The Digital Plenitude: The Decline of Elite Culture and the Rise of New Media by Jay David Bolter is a book about exactly that: the decline of one thing and the rise of another. The author attacks nor defends either, and it's not even a matter of cause and effect, in his view, the more useful point being that the present multiplicity of options when it comes to media/art/culture is not a problem to be solved, but rather a concept to understand so that we may better navigate the changed world we still need to live in....Clearly-written, well-focused.—New York Journal of Books—

The most thought-provoking sections of The Digital Plenitude explore how digital technology is reinventing art itself, birthing new forms....Bolter suggests we are witnessing the inception of a new cultural paradigm comparable to the advent of modernism in the early 20th century.

Continues [Bolter's] deep thought about broad issues of millennial media. Starting with our current political moment, Bolter looks back at the megatrends that landed us here and ahead to where they're taking us next, including everything from McLuhan and modernism to sampling and remix.

The Digital Plenitude is a comprehensive description of contemporary digital culture and many readers will find it relevant and extremely useful, while the unanswered questions require future research.

Jay David Bolter is Wesley Chair of New Media and Codirector of the Augmented Media Lab at Georgia Institute of Technology. He is the author of Remediation: Understanding New Media (with Richard Grusin), Windows and Mirrors: Interaction Design, Digital Art and the Myth of Transparency (with Diane Gromala), both published by the MIT Press, and other books.
Loading...
or
Not Currently Available for Direct Purchase