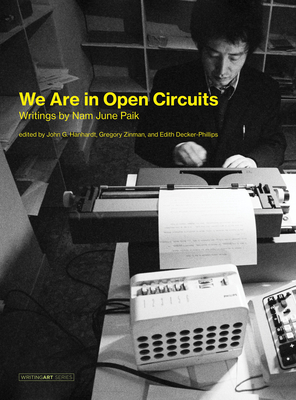 We Are in Open Circuits

Essays, project plans, and correspondence from across Nam Jun Paik's career, much of it previously out of print or unpublished.

Nam June Paik (1932–2006) is a pivotal figure in the history of modern art. Arguably the most important video artist of all time, and certainly among the most influential and prolific, Paik was a legendary innovator who transformed the electronic moving image into an artist's medium. He wrote incessantly—corresponding with friends, composing performance scores, making production notes for television projects, drafting plans for video installations, writing essays and articles. Celebrated for his visionary development of new artistic tools and for his pioneering work in video and television, Paik often wrote to sharpen his thinking and hone his ideas. He used the typewriter to fashion sentences that broke apart and reassembled themselves as he wrote, producing both poetic texts and aesthetic objects on the page. This first extensive collection of Paik's writings includes many previously unpublished and out-of-print texts.

Drawing on materials from the Smithsonian American Art Museum's Nam June Paik Archive and from a range of international publications, We Are in Open Circuits offers important but long-unavailable essays, including “Global Groove and Video Common Market”; unpublished writings on such topics as his creative partnership with the cellist Charlotte Moorman and the role of public television; a substantial part of his compilation “Scrutable Chinese”; and detailed plans for some of his groundbreaking broadcast works, including the trio Good Morning, Mr. Orwell (1984), Bye Bye Kipling (1986), and Wrap Around the World (1988). It also includes nearly 150 pages that reproduce Paik's original typed and handwritten pages, letting readers see his writing in various stages of inspiration and execution.


Praise For We Are in Open Circuits: Writings by Nam June Paik (Writing Art)…

Packed with visual stimuli alongside insightful and accessible commentary by the editors, this collection successfully adds new weight to the existing Paik scholarship by exploring his global satellite pieces and including many unpublished texts.—The Brooklyn Rail

"The book is wonderful to browse as an aesthetic artifact, but it is also a resource and record of a dynamic mind responding to a changing world from the late 1950s into the mid-1990s… We Are in Open Circuits shows how much of Paik’s art was woven with his philosophical thinking about what happens when we are all connected."
—Leonardo

John G. Hanhardt is an independent curator of film and the media arts and has curated Nam June Paik retrospectives at the Whitney Museum of American Art, Guggenheim Museum, and Smithsonian American Art Museum.

Gregory Zinman is Assistant Professor in the School of Literature, Media, and Communication at Georgia Tech.

Edith Decker-Phillips is an art historian and the author of Paik Video.
Loading...
or
Not Currently Available for Direct Purchase