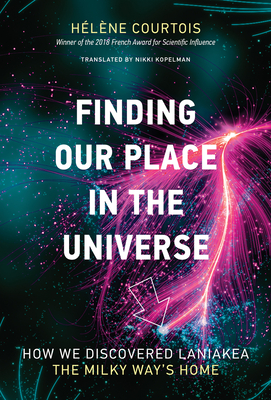 Finding Our Place in the Universe

How We Discovered Laniakea - the Milky Way's Home

How a team of researchers, led by the author, discovered our home galaxy's location in the universe.

You are here: on Earth, which is part of the solar system, which is in the Milky Way galaxy, which itself is within the extragalactic supercluster Laniakea. And how can we pinpoint our location so precisely? For twenty years, astrophysicist Hélène Courtois surfed the cosmos with international teams of researchers, working to map our local universe. In this book, Courtois describes this quest and the discovery of our home supercluster.

Courtois explains that Laniakea (which means “immense heaven” in Hawaiian) is the largest galaxy structure known to which we belong; it is huge, almost too large to comprehend—about five hundred million light-years in diameter. It contains about 100,000 large galaxies like our own, and a million smaller ones. Writing accessibly for nonspecialists, Courtois describes the visualization and analysis that allowed her team to map such large structures of the universe. She highlights the work of individual researchers, including portraits of several exceptional women astrophysicists—presenting another side of astronomy. Key ideas are highlighted in text insets; illustrations accompany the main text.

The French edition of this book was named the Best Astronomy Book of 2017 by the astronomy magazine Ciel et espace. For this MIT Press English-language edition, Courtois has added descriptions of discoveries made after Laniakea: the cosmic velocity web and the Dipole and Cold Spot repellers. An engaging account of one of the most important discoveries in astrophysics in recent years, her story is a tribute to teamwork and international collaboration.


Praise For Finding Our Place in the Universe: How We Discovered Laniakea - the Milky Way's Home…

A luminous behind-the-scenes record of a two-decade astrophysical feat.—Nature—

This identification of Laniakea is a tour de force, and Courtois' account gives it life.

Hélène Courtois is a French astrophysicist specializing in cosmography. She is Professor and Vice President at the University of Lyon 1 and the director of a research team at the Lyon Institute of Nuclear Physics. She received the 2018 Scientist of the Year Award from the French Ministry of Foreign Affairs for her international influence. She is featured in the 2019 documentary Cosmic Flows: The Cartographers of the Universe by CPB Films.
Loading...
or
Not Currently Available for Direct Purchase