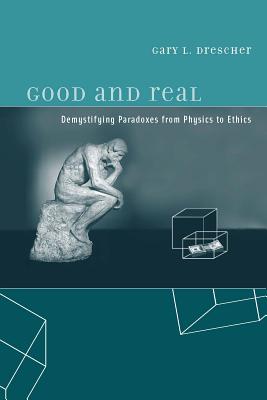 Examining a series of provocative paradoxes about consciousness, choice, ethics, and other topics, Good and Real tries to reconcile a purely mechanical view of the universe with key aspects of our subjective impressions of our own existence.

In Good and Real, Gary Drescher examines a series of provocative paradoxes about consciousness, choice, ethics, quantum mechanics, and other topics, in an effort to reconcile a purely mechanical view of the universe with key aspects of our subjective impressions of our own existence.

Many scientists suspect that the universe can ultimately be described by a simple (perhaps even deterministic) formalism; all that is real unfolds mechanically according to that formalism. But how, then, is it possible for us to be conscious, or to make genuine choices? And how can there be an ethical dimension to such choices? Drescher sketches computational models of consciousness, choice, and subjunctive reasoning--what would happen if this or that were to occur?--to show how such phenomena are compatible with a mechanical, even deterministic universe. Analyses of Newcomb's Problem (a paradox about choice) and the Prisoner's Dilemma (a paradox about self-interest vs. altruism, arguably reducible to Newcomb's Problem) help bring the problems and proposed solutions into focus. Regarding quantum mechanics, Drescher builds on Everett's relative-state formulation--but presenting a simplified formalism, accessible to laypersons--to argue that, contrary to some popular impressions, quantum mechanics is compatible with an objective, deterministic physical reality, and that there is no special connection between quantum phenomena and consciousness.

In each of several disparate but intertwined topics ranging from physics to ethics, Drescher argues that a missing technical linchpin can make the quest for objectivity seem impossible, until the elusive technical fix is at hand.