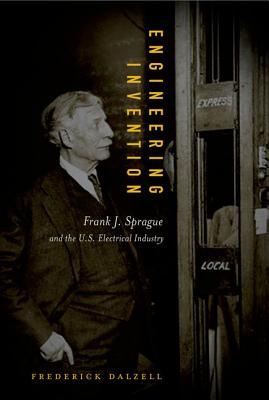 The technological breakthroughs and entrepreneurial adventures of Frank J. Sprague during the transformative years of the early electrical industry.

Over the course of a little less than twenty years, inventor Frank J. Sprague (1857-1934) achieved an astonishing series of technological breakthroughs--from pioneering work in self-governing motors to developing the first full-scale operational electric railway system--all while commercializing his inventions and promoting them (and himself as their inventor) to financial backers and the public. In Engineering Invention, Frederick Dalzell tells Sprague's story, setting it against the backdrop of one of the most dynamic periods in the history of technology. In a burst of innovation during these years, Sprague and his contemporaries--Thomas Edison, Nicolas Tesla, Elmer Sperry, George Westinghouse, and others--transformed the technologies of electricity and reshaped modern life. After working briefly for Edison, Sprague started the Sprague Electric Railway and Motor Company; designed and built an electric railroad system for Richmond, Virginia; sold his company to Edison and went into the field of electric elevators; almost accidentally discovered a multiple-control system that could equip electric train systems for mass transit; started a third company to commercialize this; then sold this company to Edison and retired (temporarily). Throughout his career, Dalzell tells us, Sprague framed technology as invention, cast himself as hero, and staged his technologies as dramas. He toiled against the odds, scraped together resources to found companies, bet those companies on technical feats--and pulled it off, multiple times. The idea of the "heroic inventor" is not, of course, the only way to frame the history of technology. Nevertheless, as Dalzell shows, Sprague, Edison, and others crafted the role consciously and actively, using it to generate vital impetus behind the process of innovation.

Frederick Dalzell received his PhD in the History of American Civilization from Harvard University and has been a researcher at Harvard Business School. He is the coauthor of Changing Fortunes: Remaking the Industrial Corporation and Driving Change: The UPS Approach to Business.
or
Not Currently Available for Direct Purchase
Copyright © 2020 American Booksellers Association