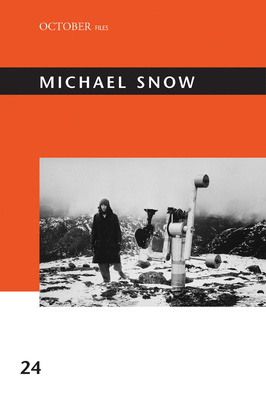 Essential texts on the work of the influential artist Michael Snow: essays and interviews spanning more than four decades.

Few filmmakers have had as large an impact on the recent avant-garde film scene as Canadian Michael Snow (b. 1928). His works in a range of media—film, installation, video, painting, sculpture, sound, photography, drawing, writing, and music—address the fundamental properties of his materials, the conditions of perception and experience, questions of authorship in technologically reproducible media, and techniques of translation through written and pictorial representation. His film Wavelength (1967) is a milestone of avant-garde cinema and possibly the most frequently discussed “structural” film ever made. This volume collects essential texts on Snow's work, with essays and interviews spanning more than four decades.

From its earliest issues, October has been a primary interlocutor of Snow's work, and many of these texts first appeared in its pages. Written by such distinguished critics and scholars as Annette Michelson, Hubert Damisch, and Malcolm Turvey, they document Snow's participation in postwar discourses of minimalism, postminimalism, photo-conceptualism, and avant-garde cinema, and examine particular works. Thierry de Duve's essay on linguistics in Snow's work appears alongside Snow's response. The volume also includes other writings by Snow, images from his 1975 work Musics for Piano, Whistling, Microphone, and Tape Recorder, and an interview with the artist conducted by Annette Michelson.

Annette Michelson (1922–2018) was widely considered one of the twentieth century's most influential writers on film. During her more than five-decade career, she was an art editor and critic for the New York Herald Tribune, a writer for Artforum, a founding editor of the journal October, and Professor in the Department of Cinema Studies at New York University. Some of Michelson's essays on film were collected in On the Eve of the Future: Selected Writings on Film (MIT Press).

Kenneth White is Assistant Professor of Film Studies in the Cinema Department at the State University of New York at Binghamton. He is editor of the book Carolee Schneemann: Unforgivable.
Loading...
or
Not Currently Available for Direct Purchase