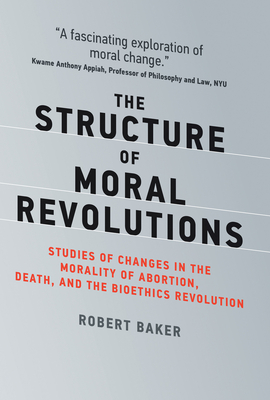 The Structure of Moral Revolutions

Studies of Changes in the Morality of Abortion, Death, and the Bioethics Revolution (Basic Bioethics)

A theoretical account of moral revolutions, illustrated by historical cases that include the criminalization and decriminalization of abortion and the patient rebellion against medical paternalism.

We live in an age of moral revolutions in which the once morally outrageous has become morally acceptable, and the formerly acceptable is now regarded as reprehensible. Attitudes toward same-sex love, for example, and the proper role of women, have undergone paradigm shifts over the last several decades. In this book, Robert Baker argues that these inversions are the product of moral revolutions that follow a pattern similar to that of the scientific revolutions analyzed by Thomas Kuhn in his influential book, The Structure of Scientific Revolutions.

After laying out the theoretical terrain, Baker develops his argument with examples of moral reversals from the recent and distant past. He describes the revolution, led by the utilitarian philosopher Jeremy Bentham, that transformed the postmortem dissection of human bodies from punitive desecration to civic virtue; the criminalization of abortion in the nineteenth century and its decriminalization in the twentieth century; and the invention of a new bioethics paradigm in the 1970s and 1980s, supporting a patient-led rebellion against medical paternalism. Finally, Baker reflects on moral relativism, arguing that the acceptance of “absolute” moral truths denies us the diversity of moral perspectives that permit us to alter our morality in response to changing environments.


Praise For The Structure of Moral Revolutions: Studies of Changes in the Morality of Abortion, Death, and the Bioethics Revolution (Basic Bioethics)…

"Baker ends by stressing that there is no such thing as a universal moral standard and that judgements about right or wrong are informed by culture and change over time. Whatever their misgivings with aspects of the book, historians will surely endorse this premise and Baker’s conclusion that readers should ‘become students of history’ if they wish to understand moral change."—Social History of Medicine

Robert Baker is William D. Williams Professor of Philosophy at Union College in Schenectady, New York, and Professor of Bioethics and Founding Director (Emeritus) of the Bioethics Program at Clarkson University–Icahn School of Medicine at Mount Sinai in New York City. He is the author of Before Bioethics: A History of American Medical Ethics.
Loading...
or
Not Currently Available for Direct Purchase