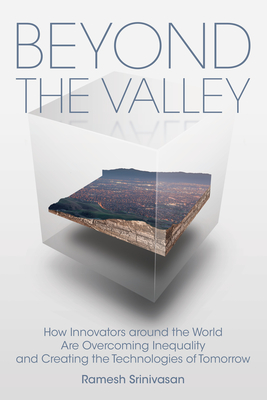 How to repair the disconnect between designers and users, producers and consumers, and tech elites and the rest of us: toward a more democratic internet.

In this provocative book, Ramesh Srinivasan describes the internet as both an enabler of frictionless efficiency and a dirty tangle of politics, economics, and other inefficient, inharmonious human activities. We may love the immediacy of Google search results, the convenience of buying from Amazon, and the elegance and power of our Apple devices, but it's a one-way, top-down process. We're not asked for our input, or our opinions--only for our data. The internet is brought to us by wealthy technologists in Silicon Valley and China. It's time, Srinivasan argues, that we think in terms beyond the Valley.

Srinivasan focuses on the disconnection he sees between designers and users, producers and consumers, and tech elites and the rest of us. The recent Cambridge Analytica and Russian misinformation scandals exemplify the imbalance of a digital world that puts profits before inclusivity and democracy. In search of a more democratic internet, Srinivasan takes us to the mountains of Oaxaca, East and West Africa, China, Scandinavia, North America, and elsewhere, visiting the "design labs" of rural, low-income, and indigenous people around the world. He talks to a range of high-profile public figures--including Elizabeth Warren, David Axelrod, Eric Holder, Noam Chomsky, Lawrence Lessig, and the founders of Reddit, as well as community organizers, labor leaders, and human rights activists.. To make a better internet, Srinivasan says, we need a new ethic of diversity, openness, and inclusivity, empowering those now excluded from decisions about how technologies are designed, who profits from them, and who are surveilled and exploited by them.