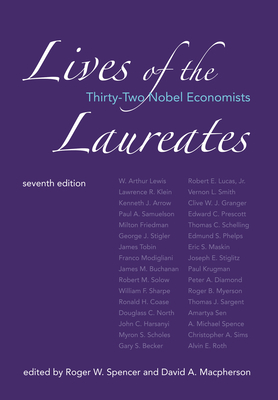 Lives of the Laureates, seventh edition

Autobiographical accounts by Nobel laureates reflect the richness and diversity of contemporary economic thought and offer insights into the creative process; with six new laureates.

Lives of the Laureates offers readers an informal history of modern economic thought as told through autobiographical essays by thirty-two Nobel Prize laureates in economics. The essays not only provide unique insights into major economic ideas of our time but also shed light on the processes of intellectual discovery and creativity. The accounts are accessible and engaging, achieving clarity without sacrificing inherently difficult content.

This seventh edition adds six Nobelists to its pages: Roger B. Myerson (co-recipient in 2007) describes his evolution as a game theorist and his application of game theory to issues that ranged from electoral systems to perverse incentives; Thomas J. Sargent (co-recipient in 2011), recounts the development of the rational expectations model, which fundamentally changed the policy implications for macroeconomic models; Amartya Sen (recipient in 1998) reflects on his use of a bicycle (later donated to the Nobel Museum) to collect data early in his career; A. Michael Spence (co-recipient in 2001) describes, among other things, his whiplash-inducing first foray into teaching an undergraduate class; Christopher A. Sims (co-recipient in 2011) discusses his “non-Nobel” research; and Alvin E. Roth (co-recipient in 2012) chronicles the “three insurrections” he has witnessed in mainstream economics.

Lives of the Laureates grows out of a continuing lecture series at Trinity University in San Antonio, which invites Nobelists from American universities to describe their evolution as economists in personal as well as technical terms.

Kenneth J. Arrow, who was awarded the Nobel Memorial Prize in Economics in 1972, is Joan Kenny Professor of Economics and Professor of Operations Research at Stanford University.

Paul Samuelson (1915–2009) received the Nobel Prize in Economics in 1970. He was Institute Professor, Emeritus; Professor of Economics, Emeritus; and Gordon Y. Billard Fellow at MIT. His influential Economics: An Introductory Analysis is the most widely used economics textbook ever published.

James Tobin, who received the Nobel prize in economics in 1981, is Sterling Professor of Economics at Yale.

Franco Modigliani (1918-2003) was Professor Emeritus of Economics and Management at MIT, where he began teaching in 1960. He won the Nobel Prize for Economics in 1985.

James J. Heckman is the Henry Schultz Distinguished Service Professor of Economics at the University of Chicago. He was a recipient of the Nobel Prize for Economic Sciences in 2000. He is the coauthor (with Alan B. Krueger) of Inequality in America: What Role for Human Capital Policies? (MIT Press).

Edward C. Prescott is Regents' Professor at the University of Minnesota and Economic Advisor, Federal Reserve Bank of Minneapolis.

Edmund S. Phelps is McVickar Professor of Political Economy at Columbia University and founder of Columbia's Center on Capitalism and Society. He was the 2006 Nobel Laureate in Economics.

Paul Krugman is Professor of Economics and International Affairs at Princeton University and a New York Times columnist. He was awarded the Nobel Prize for Economics in 2008.

Peter Diamond is John and Jennie S. McDonald Professor of Economics at MIT. He received the 2010 Nobel Prize in Economics.
Loading...
or
Not Currently Available for Direct Purchase