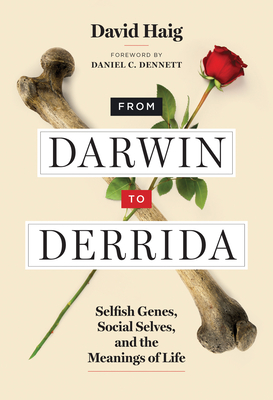 From Darwin to Derrida

Selfish Genes, Social Selves, and the Meanings of Life

How the meaningless process of natural selection produces purposeful beings who find meaning in the world.

In From Darwin to Derrida, evolutionary biologist David Haig explains how a physical world of matter in motion gave rise to a living world of purpose and meaning. Natural selection, a process without purpose, gives rise to purposeful beings who find meaning in the world. The key to this, Haig proposes, is the origin of mutable “texts”—genes—that preserve a record of what has worked in the world. These texts become the specifications for the intricate mechanisms of living beings.

Haig draws on a wide range of sources—from Laurence Sterne's Tristram Shandy to Immanuel Kant's Critique of the Power of Judgment to the work of Jacques Derrida to the latest findings on gene transmission, duplication, and expression—to make his argument. Genes and their effects, he explains, are like eggs and chickens. Eggs exist for the sake of becoming chickens and chickens for the sake of laying eggs. A gene's effects have a causal role in determining which genes are copied. A gene (considered as a lineage of material copies) persists if its lineage has been consistently associated with survival and reproduction. Organisms can be understood as interpreters that link information from the environment to meaningful action in the environment. Meaning, Haig argues, is the output of a process of interpretation; there is a continuum from the very simplest forms of interpretation, instantiated in single RNA molecules near the origins of life, to the most sophisticated. Life is interpretation—the use of information in choice.


Praise For From Darwin to Derrida: Selfish Genes, Social Selves, and the Meanings of Life…

"A challenging though rewarding exploration of the meaning and purpose of life."
—Kirkus Reviews

"What, Haig asks, is the teleological purpose of consciousness? In the case of human beings, our consciousness is designed to interpret, through an evolved instinct of sympathy, the subjective attitudes and intentions of others."
—CHOICE

“David Haig's powerful mind and trenchant wit are fully matched by his caring heart and his gracious style. I shall be recommending this book to my students, giving it to my friends, and sampling it repeatedly.”
—Stephen C. Stearns, Edward P. Bass Professor of Ecology and Evolutionary Biology at Yale University; author of Evolutionary Medicine

“Haig's book could be a game-changer in the fraught relation between the biological sciences and philosophy. Its intriguing moral may be his dauntingly scientific first thirteen chapters legitimize and actually call for the kind of philosophical thinking that his last chapters unabashedly exemplify.”
—Richard Schacht, Jubilee Professor of Philosophy (Emeritus), University of Illinois

“In this profound and witty book, David Haig rediscovers Aristotle's four causes and tackles the foundations of biology and philosophy (and their joint history). He offers a subtle yet far-reaching, reinterpretation of genetics, culture, and the nature and meaning of meaning. Read it; he writes, and rewrites, all of us.”
—Eric Schliesser, Professor, Political Science, University of Amsterdam, and Visiting Scholar, Smith Institute for Political Economy and Philosophy,  Chapman University

David A. Haig is George Putnam Professor of Organismic and Evolutionary Biology at Harvard University.