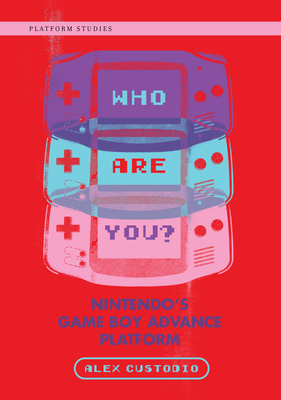 The Game Boy Advance platform as computational system and cultural artifact, from its 2001 release through hacks, mods, emulations, homebrew afterlives.

In 2002, Nintendo of America launched an international marketing campaign for the Game Boy Advance that revolved around the slogan “Who Are You?”—asking potential buyers which Nintendo character, game, or even device they identified with and attempting to sell a new product by exploiting players' nostalgic connections to earlier ones. Today, nearly two decades after its release, and despite the development of newer and more powerful systems, Nintendo's Game Boy Advance lives on, through a community that continues to hack, modify, emulate, make, break, remake, redesign, trade, use, love, and play with the platform. In this book Alex Custodio traces the network of hardware and software afterlives of the Game Boy Advance platform.

Each chapter considers a component of this network—hardware, software, peripheral, or practice—that illuminates the platform's unique features as a computational system and a cultural artifact. Examining the evolution of the design and architecture of Nintendo's handhelds and home consoles, and the constraints imposed on developers and players, for example, Custodio finds that Nintendo essentially embeds nostalgia into its hardware. She explores Nintendo's expansion of the platform through interoperability; physical and affective engagement with the Game Boy Advance; portability, private space, and social interaction; the platformization of nostalgia; fan-generated content including homebrew, hacking, and hardware modding; and e-waste—the final afterlife of consumer electronics. Although the Game Boy Advance is neither the most powerful nor the most popular of Nintendo's handhelds, Custodio argues, it is the platform that most fundamentally embodies Nintendo's reliance on the aesthetics and materiality of nostalgia.


Praise For Who Are You?: Nintendo's Game Boy Advance Platform (Platform Studies)…

"Alex Custodio’s rich and rewarding take on the Game Boy Advance shows how to innovatively read residuals of media culture. Paying careful attention to both materiality and cultural narratives, Custodio’s take offers a must-read for game and media studies while showing how to develop media archaeological research in the contexts of practices such as modding." – Jussi Parikka, University of Southampton, UK, and Academy of Performing Arts, Prague

"With Who Are You?, Alex Custodio gives us an essential, and elegant, addition to platform studies as she deftly moves between the Nintendo Game Boy Advance as it was when it was released in 2001 and the way the portable device has generated nostalgia and innovation over the twenty years since at the hands of hobbyists, tinkerers, and everyday users alike." – Lori Emerson, Associate Professor and Director of the Media Archaeology Lab, University of Colorado Boulder

"Alex Custodio’s rich study of Nintendo’s design culture delivers a new take on platform studies by considering the Game Boy Advance as a flexible assemblage of technologies and practices. Gunpei Yokoi described Nintendo engineering as ‘lateral thinking through withered technology.’ Custodio builds on this for critical and historical studies in ways that will fascinate anyone with an interest in game, technology, or media studies." – Henry Lowood, Harold C. Hohbach Curator for History of Science & Technology and Film & Media Collections at Stanford University Libraries

Alex Custodio is a scholar, writer, and artist living in Montreal.
Loading...
or
Not Currently Available for Direct Purchase