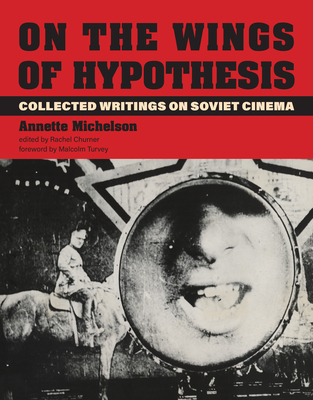 On the Wings of Hypothesis

Annette Michelson's erudite and incisive readings of the revolutionary films of Sergei Eisenstein and Dziga Vertov, collected for the first time.

This posthumous volume gathers Annette Michelson's erudite and incisive readings of the revolutionary films of Sergei Eisenstein and Dziga Vertov, giving readers the opportunity to track her sustained investigations into their work. Michelson introduced American audiences to Soviet cinema in the early 1970s, extending the interpretive paradigm she had used for American filmmakers of the mid-twentieth century—in which she emphasized phenomenological readings of their work—to films and writings by Eisenstein and Vertov. Over four decades, Michelson returned again and again to what she calls, following Eisenstein, “intellectual cinema”—the deliberate attempt to create philosophically informed analogues for consciousness.

The volume includes Michelson's major essays on Eisenstein's unrealized attempts to make movies of both Marx's Capital and Joyce's Ulysses, as well as her authoritative discussion of Vertov's 1929 masterpiece The Man with a Movie Camera. Together, the texts demonstrate Michelson's pervasive influence as a writer and thinker, and her role in the establishment of cinema studies as an academic field. This collection makes these canonical texts available for a new generation of film scholars.

Annette Michelson (1922–2018) was widely considered one of the twentieth century's most influential writers on film. During her more than five-decade career, she was an art editor and critic for the New York Herald Tribune, a writer for Artforum, a founding editor of the journal October, and Professor in the Department of Cinema Studies at New York University. Some of Michelson's essays on film were collected in On the Eve of the Future: Selected Writings on Film (MIT Press).

Rachel Churner is an art critic and editor. She teaches at the New School, New York, and is a cofounder of no place press. From 2011 to 2014, she owned and operated the New York gallery Churner and Churner."

Malcolm Turvey is Professor of Film History at Sarah Lawrence College and an editor of October. He is the author of Doubting Vision: Film and the Revelationist Tradition.
Loading...
or
Not Currently Available for Direct Purchase