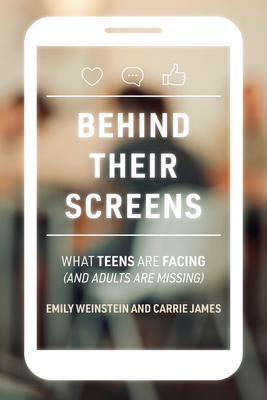 What Teens Are Facing (and Adults Are Missing)

How teens navigate a networked world and how adults can support them.

What are teens actually doing on their smartphones? Contrary to many adults’ assumptions, they are not simply “addicted” to their screens, oblivious to the afterlife of what they post, or missing out on personal connection. They are just trying to navigate a networked world. In Behind Their Screens, Emily Weinstein and Carrie James, Harvard researchers who are experts on teens and technology, explore the complexities that teens face in their digital lives, and suggest that many adult efforts to help—“Get off your phone!” “Just don’t sext!”—fall short.

Weinstein and James warn against a single-minded focus by adults on “screen time.” Teens worry about dependence on their devices, but disconnecting means being out of the loop socially, with absence perceived as rudeness or even a failure to be there for a struggling friend. Drawing on a multiyear project that surveyed more than 3,500 teens, the authors explain that young people need empathy, not exasperated eye-rolling. Adults should understand the complicated nature of teens’ online life rather than issue commands, and they should normalize—let teens know that their challenges are shared by others—without minimizing or dismissing. Along the way, Weinstein and James describe different kinds of sexting and explain such phenomena as watermarking nudes, comparison quicksand, digital pacifiers, and collecting receipts. Behind Their Screens offers essential reading for any adult who cares about supporting teens in an online world.

Praise For Behind Their Screens: What Teens Are Facing (and Adults Are Missing)…

"Authors Emily Weinstein and Carrie James (both affiliated with the Harvard Graduate School of Education) set out a playbook for empowering kids to use digital tech well, rather than taking away their power so that they can’t get into trouble. Weinstein and James conducted extensive research with teens, parents and teachers, and the tactics they suggest are all drawn from real-world successes...Great stuff."
—Cory Doctorow

"The authors’ research is impressive...Parents and educators losing sleep over what’s happening online would do well to give this a look.”
—Publishers Weekly

“The authors offer advice for parents, emphasizing the need to avoid simplistic solutions, to understand the complexity of the social media environment, and to listen with empathy. For anyone who wants to know where the social media road is leading, this is an important book.”
—Kirkus Reviews

"Because they took so many teen voices into consideration and listened to what real teens had to say about these issues, the authors are able to understand and convey the complexities of teens' digital lives with respect and nuance. The authors actually give teens the credit they deserve instead of assuming teens are blind or naive about screen use and social media...[the book] adds a new and important voice to the conversation around teenagers and the ways we interact with our screens. It's a helpful guide for any parent constantly arguing with their teens about screens, people who feel that social media is “running the new generation” and anyone who wants to know more about how the modern digital age is affecting young people."
— the San Francisco Chronicle

“The book makes a compelling case for partnering with young people in order to understand young people. Their research brings to light some phenomena that demonstrate how highly attuned teens are—how precisely attuned—to one another’s responses and their own behavior.”
—Fast Company

Emily Weinstein is a Research Director at Project Zero at Harvard and a Lecturer at the Graduate School of Education.

Carrie James is a Principal Investigator at Project Zero and the author of Disconnected: Youth, New Media, and the Ethics Gap (MIT Press).

Weinstein’s and James’s work has been covered in Time, the Boston Globe, the Washington Post, and the Atlantic, and they are sought-after speakers on teens and technology.
Loading...
or support indie stores by buying on