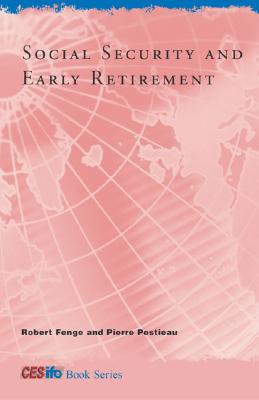 Theoretical and empirical analysis of the relationship between retirement decision and pension systems, with policy recommendations for reversing the current trend toward early retirement.

The contrasting trends toward earlier retirement and greater longevity have resulted in steadily increasing retirement costs over the last forty years. One important factor influencing early retirement decisions is the expansion of retirement benefits; but studies predict that most countries, particularly those with early retirement incentives, will be unable to meet future pension and social security obligations. In this timely CESifo volume, Robert Fenge and Pierre Pestieau examine empirical and theoretical evidence that explains why early retirement has become such a burden for social security systems and suggest pension system reforms that will reverse the trend.

Drawing on evidence from the European Union (with comparisons to other industrialized countries including the United States and Canada), the authors demonstrate that the effective retirement age is influenced by social security regulations (such as a change in eligibility age) and discuss ways of measuring these embedded incentives. Fenge and Pestieau examine the implicit taxes on prolonged working life from normative and political economy perspectives. They discuss optimal payroll tax rates that minimize distortions of labor supply and retirement decisions and consider alternative ways to finance benefits, including consumption and capital income taxation. They discuss why policies are designed to discourage employment among older workers and why reforms to counter this often meet resistance. They demonstrate, contrary to the belief of many European governments, that pushing older workers into retirement does not free jobs for young unemployed workers. They show that the gap between salaries and productivity is an incentive for employers to rid themselves of older workers and argue that governments should not support this behavior by compensating older workers for the difference between severance payments and salaries in early retirement programs.

Pierre Pestieau is Professor of Economics at the University of Liege. Pestieau is coauthor (with Robert Fenge) of Social Security and Early Retirement (MIT Press, 2005).
Loading...
or
Not Currently Available for Direct Purchase