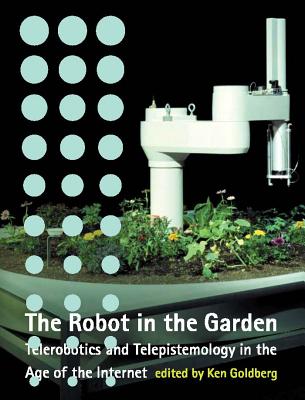 The Robot in the Garden (Hardcover)

Telerobotics and Telepistemology in the Age of the Internet (Leonardo)

An interdisciplinary collection of essays on telepistemology--the study of knowledge acquired at a distance.

The Robot in the Garden initiates a critical theory of telerobotics and introduces telepistemology, the study of knowledge acquired at a distance. Many of our most influential technologies, the telescope, telephone, and television, were developed to provide knowledge at a distance. Telerobots, remotely controlled robots, facilitate action at a distance. Specialists use telerobots to explore actively environments such as Mars, the Titanic, and Chernobyl. Military personnel increasingly employ reconnaissance drones and telerobotic missiles. At home, we have remote controls for the garage door, car alarm, and television (the latter a remote for the remote).

The Internet dramatically extends our scope and reach. Thousands of cameras and robots are now accessible online. Although the role of technical mediation has been of interest to philosophers since the seventeenth century, the Internet forces a reconsideration. As the public gains access to telerobotic instruments previously restricted to scientists and soldiers, questions of mediation, knowledge, and trust take on new significance for everyday life.

The seventeen essays, by leading figures in philosophy, art, history, and engineering, are organized into three sections: Philosophy; Art, History, and Critical Theory; and Engineering, Interface, and System Design.

Ken Goldberg is Associate Professor of Industrial Engineering and founder of the Art, Technology, and Culture Colloquium at the University of California, Berkeley. His Net art installations include "Dislocation of Intimacy," "Memento Mori," and "The Telegarden."
or
Not Currently Available for Direct Purchase
Copyright © 2020 American Booksellers Association