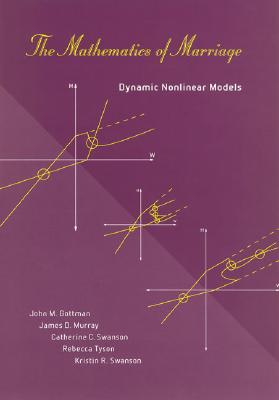 The Mathematics of Marriage

Divorce rates are at an all-time high. But without a theoretical understanding of the processes related to marital stability and dissolution, it is difficult to design and evaluate new marriage interventions. The Mathematics of Marriage provides the foundation for a scientific theory of marital relations. The book does not rely on metaphors, but develops and applies a mathematical model using difference equations. The work is the fulfillment of the goal to build a mathematical framework for the general system theory of families first suggested by Ludwig Von Bertalanffy in the 1960s.The book also presents a complete introduction to the mathematics involved in theory building and testing, and details the development of experiments and models. In one "marriage experiment," for example, the authors explored the effects of lowering or raising a couple's heart rates. Armed with their mathematical model, they were able to do real experiments to determine which processes were affected by their interventions.

Applying ideas such as phase space, null clines, influence functions, inertia, and uninfluenced and influenced stable steady states (attractors), the authors show how other researchers can use the methods to weigh their own data with positive and negative weights. While the focus is on modeling marriage, the techniques can be applied to other types of psychological phenomena as well.

Kristin R. Swanson is Senior Fellow in Pathology and Applied Mathematics at the University of Washington.
Loading...
or
Not Currently Available for Direct Purchase