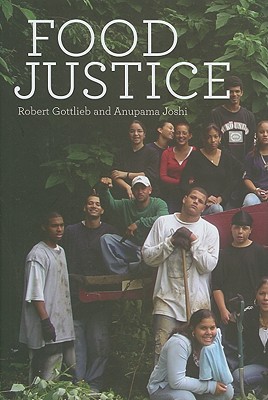 In today's food system, farm workers face difficult and hazardous conditions, low-income neighborhoods lack supermarkets but abound in fast-food restaurants and liquor stores, food products emphasize convenience rather than wholesomeness, and the international reach of American fast-food franchises has been a major contributor to an epidemic of "globesity." To combat these inequities and excesses, a movement for food justice has emerged in recent years seeking to transform the food system from seed to table. In "Food Justice," Robert Gottlieb and Anupama Joshi tell the story of this emerging movement.

A food justice framework ensures that the benefits and risks of how food is grown and processed, transported, distributed, and consumed are shared equitably. Gottlieb and Joshi recount the history of food injustices and describe current efforts to change the system, including community gardens and farmer training in Holyoke, Massachusetts, youth empowerment through the Rethinkers in New Orleans, farm-to-school programs across the country, and the Los Angeles school system's elimination of sugary soft drinks from its cafeterias. And they tell how food activism has succeeded at the highest level: advocates waged a grassroots campaign that convinced the Obama White House to plant a vegetable garden. The first comprehensive inquiry into this emerging movement, " Food Justice" addresses the increasing disconnect between food and culture that has resulted from our highly industrialized food system.

George Perkovich is vice president for studies at the Carnegie Endowment for InternationalPeace, in Washington, D.C., and author of India's Nuclear Bomb.
or
Not Currently Available for Direct Purchase
Copyright © 2020 American Booksellers Association