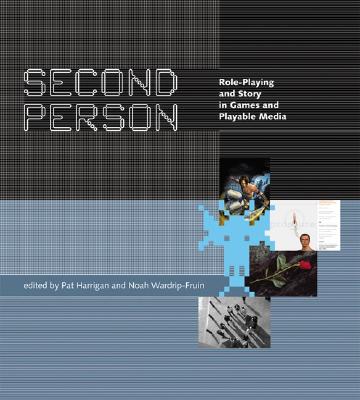 Role-Playing and Story in Games and Playable Media

Games and other playable forms, from interactive fictions to improvisational theater, involve role playing and story -- something played and something told. In Second Person, game designers, authors, artists, and scholars examine the different ways in which these two elements work together in tabletop role-playing games (RPGs), computer games, board games, card games, electronic literature, political simulations, locative media, massively multiplayer games, and other forms that invite and structure play.

Second Person -- so called because in these games and playable media it is "you" who plays the roles, "you" for whom the story is being told -- first considers tabletop games ranging from Dungeons & Dragons and other RPGs with an explicit social component to Kim Newman's Choose Your Own Adventure-style novel Life's Lottery and its more traditional author-reader interaction. Contributors then examine computer-based playable structures that are designed for solo interaction -- for the singular "you" -- including the mainstream hit Prince of Persia: The Sands of Time and the genre-defining independent production Fa ade. Finally, contributors look at the intersection of the social spaces of play and the real world, considering, among other topics, the virtual communities of such Massively Multiplayer Online Role Playing Games (MMORPGs) as World of Warcraft and the political uses of digital gaming and role-playing techniques (as in The Howard Dean for Iowa Game, the first U.S. presidential campaign game).

In engaging essays that range in tone from the informal to the technical, these writers offer a variety of approaches for the examination of an emerging field that includes works as diverse as George R.R. Martin's Wild Cards series and the classic Infocom game Planetfall. Appendixes contain three fully-playable tabletop RPGs that demonstrate some of the variations possible in the form.

R.G. Davis is the founder of the San Francisco Mime Troupe, and was director for the ﬁrsteight years. He is the author of "Guerrilla Theatre" (Tulane Drama Review T32) andSan Francisco Mime Troupe: The First Ten Years (Ramparts Press, 1975). In his NewYork phase he brought Dario Fo's plays to North America. An author of a number of articleson Brecht and ecology, Eisler and left music, Davis in the 1990s began to study ecologyat various universities and became an agroecological (organic farmer) activist. He has taughtat NYU, San Francisco State University, Oran University in Algiers, and workshops inCuba and Nicaragua. Currently he is ﬁnishing his second MA at SFSU.
Loading...
or
Not Currently Available for Direct Purchase