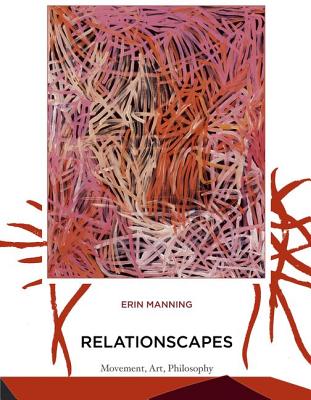 With Relationscapes, Erin Manning offers a new philosophy of movement challenging the idea that movement is simple displacement in space, knowable only in terms of the actual. Exploring the relation between sensation and thought through the prisms of dance, cinema, art, and new media, Manning argues for the intensity of movement. From this idea of intensity -- the incipiency at the heart of movement -- Manning develops the concept of preacceleration, which makes palpable how movement creates relational intervals out of which displacements take form. Discussing her theory of incipient movement in terms of dance and relational movement, Manning describes choreographic practices that work to develop with a body in movement rather than simply stabilizing that body into patterns of displacement. She examines the movement-images of Leni Riefenstahl, Etienne-Jules Marey, and Norman McLaren (drawing on Bergson's idea of duration), and explores the dot-paintings of contemporary Australian Aboriginal artists. Turning to language, Manning proposes a theory of prearticulation claiming that language's affective force depends on a concept of thought in motion. Relationscapes takes a -Whiteheadian perspective, - recognizing Whitehead's importance and his influence on process philosophers of the late twentieth century -- Deleuze and Guattari in particular. It will be of special interest to scholars in new media, philosophy, dance studies, film theory, and art history.

Erin Manning holds a University Research Chair in the Faculty of Fine Arts at Concordia University in Montreal. She is director of the Sense Lab and the author of Politics of Touch: Sense, Movement, Sovereignty and Ephemeral Territories: Representing Nation, Home, and Identity in Canada.
Loading...
or
Not Currently Available for Direct Purchase