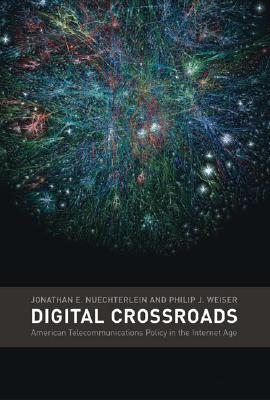 With a new preface for the paperback editionTelecommunications policy profoundly affects the economy and our everyday lives. Yet accounts of important telecommunications issues tend to be either superficial (and inaccurate) or mired in jargon and technical esoterica. In Digital Crossroads, Jonathan Nuechterlein and Philip Weiser offer a clear, balanced, and accessible analysis of competition policy issues in the telecommunications industry. After giving a big picture overview of the field, they present sharply reasoned analyses of the major technological, economic, and legal developments confronting communications policymakers in the twenty-first century.Since the passage of the Telecommunications Act of 1996, when Congress fundamentally reoriented the existing regulatory scheme, no book has cogently explained the intricacies of telecommunications competition policy in the Internet age for general readers, students, and practitioners alike. Digital Crossroads meets this need, focusing on the regulatory dimensions of competition in wireline and wireless telephone service; competition among rival platforms for broadband Internet service and video distribution; and the Internet's transformation of every aspect of the telecommunications industry, particularly through the emergence of "voice over Internet protocol" (VoIP). The authors explain not just the complicated legal issues governing the industry, but also the rapidly changing technological and economic context in which these issues arise. The book includes extensive endnotes and tables that cover relevant court decisions, FCC orders, and academic commentaries; a glossary of acronyms; a statutory addendum containing the most important provisions of federal telecommunications law; and two appendixes with information on more specialized topics. Supplementary materials for students are available at http: //spot.colorado.edu/ weiserpj.

Jonathan E. Nuechterlein is a partner at Wilmer Cutler Pickering Hale and Dorr LLP in Washington, DC. He served as Deputy General Counsel of the FCC in 2000-2001, as Assistant to the Solicitor General in 1996-2000, and as law clerk to US Supreme Court Justice David H. Souter.
Loading...
or
Not Currently Available for Direct Purchase