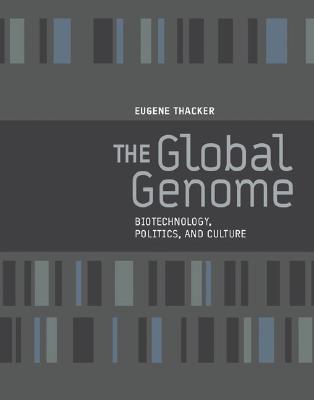 How global biotechnology is redefining life itself.

In the age of global biotechnology, DNA can exist as biological material in a test tube, as a sequence in a computer database, and as economically valuable information in a patent. In The Global Genome, Eugene Thacker asks us to consider the relationship of these three entities and argues that--by their existence and their interrelationships--they are fundamentally redefining the notion of biological life itself.

Biological science and the biotech industry are increasingly organized at a global level, in large part because of the use of the Internet in exchanging biological data. International genome sequencing efforts, genomic databases, the development of World Intellectual Property policies, and the borderless business of biotech are all evidence of the global intersections of biology and informatics--of genetic codes and computer codes. Thacker points out the internal tension in the very concept of biotechnology: the products are more tech than bio, but the technology itself is fully biological, composed of the biomaterial labor of genes, proteins, cells, and tissues. Is biotechnology a technology at all, he asks, or is it a notion of life itself that is inseparable from its use in the biotech industry?

The three sections of the book cover the three primary activities of biotechnology today: the encoding of biological materials into digital form--as in bioinformatics and genomics; its recoding in various ways--including the biocolonialism of mapping genetically isolated ethnic populations and the newly pervasive concern over biological security; and its decoding back into biological materiality--as in tissue engineering and regenerative medicine. Thacker moves easily from science to philosophy to political economics, enlivening his account with ideas from such thinkers as Georges Bataille, Georges Canguilhem, Michel Foucault, Antonio Negri, and Paul Virilio. The global genome, says Thacker, makes it impossible to consider biotechnology without the context of globalism.