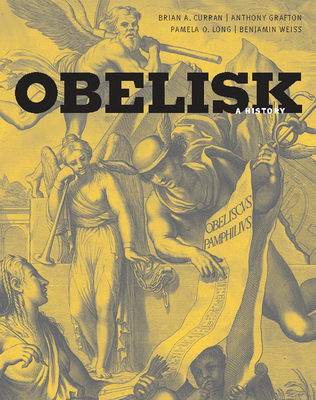 A History (Publications of the Burndy Library)

The many meanings of obelisks across nearly forty centuries, from Ancient Egypt (which invented them) to twentieth-century America (which put them in Hollywood epics).

Nearly every empire worthy of the name—from ancient Rome to the United States—has sought an Egyptian obelisk to place in the center of a ceremonial space. Obelisks—giant standing stones, invented in Ancient Egypt as sacred objects—serve no practical purpose. For much of their history their inscriptions, in Egyptian hieroglyphics, were completely inscrutable. Yet over the centuries dozens of obelisks have made the voyage from Egypt to Rome, Constantinople, and Florence; to Paris, London, and New York. New obelisks and even obelisk-shaped buildings rose as well—the Washington Monument being a noted example. Obelisks, everyone seems to sense, connote some very special sort of power. This beautifully illustrated book traces the fate and many meanings of obelisks across nearly forty centuries—what they meant to the Egyptians, and how other cultures have borrowed, interpreted, understood, and misunderstood them through the years. In each culture obelisks have taken on new meanings and associations. To the Egyptians, the obelisk was the symbol of a pharaoh's right to rule and connection to the divine. In ancient Rome, obelisks were the embodiment of Rome's coming of age as an empire. To nineteenth-century New Yorkers, the obelisk in Central Park stood for their country's rejection of the trappings of empire just as it was itself beginning to acquire imperial power. And to a twentieth-century reader of Freud, the obelisk had anatomical and psychological connotations. The history of obelisks is a story of technical achievement, imperial conquest, Christian piety and triumphalism, egotism, scholarly brilliance, political hubris, bigoted nationalism, democratic self-assurance, Modernist austerity, and Hollywood kitsch—in short, the story of Western civilization.

Brian A. Curran is Associate Professor of Art History at the Pennsylvania State University.

Pamela O. Long is an independent historian who has published widely in medieval and Renaissance history of science and technology.

Benjamin Weiss is Manager of Adult Learning Resources at the Museum of Fine Arts, Boston.
Loading...
or
Not Currently Available for Direct Purchase