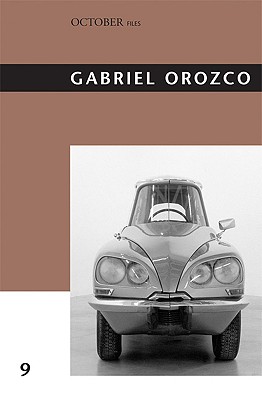 A collection of writings on a conceptual and installation artist who has been called "one of the most important artists of the decade."

Gabriel Orozco's work is sometimes considered uncategorizable; but his sculpture, photography, drawing, collage, and installations are unified by their devotion to the antispectacular, to the everyday, and to the explorations of complexities that are not immediately obvious. Orozco (born in Mexico in 1962) pays meticulous attention to what he calls the "liquidity of things" as seen in mundane and evanescent objects and elements of everyday life--the momentary fog upon a polished piano top, a deflated football, tins of cat food balanced on watermelons, light through leaves, the screech of a tire, chess pieces on a chessboard. "People forget that I want to disappoint," he has said. "I use that word deliberately. I want to disappoint the expectations of the one who waits to be amazed. When you make a decision someone is going to be disappointed because they think they know you. It is only then that the poetic can happen." This collection of critical writings on Orozco includes two interviews with the artist and a lecture by him (this last published here for the first time in English) as well as essays by such prominent critics as Benjamin H. D. Buchloh, Briony Fer, Molly Nesbit, and the editor of the volume, Yve-Alain Bois. It serves both as the summation of critical thinking on Orozco's work up to now and as a starting point for future consideration.

Madanmohan Rao is adjunct faculty at the IndianInstitute of Information Technology in Bangalore. Heis editor of two book series: Asia-Pacific InternetHandbook and KM Chronicles.
Loading...
or
Not Currently Available for Direct Purchase