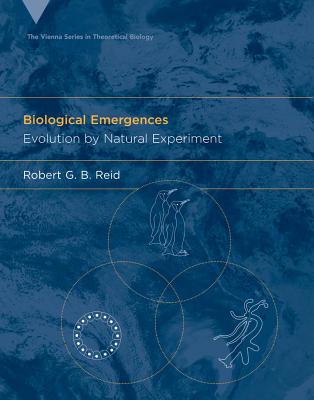 A critique of selectionism and the proposal of an alternate theory of emergent evolution that is causally sufficient for evolutionary biology.

Natural selection is commonly interpreted as the fundamental mechanism of evolution. Questions about how selection theory can claim to be the all-sufficient explanation of evolution often go unanswered by today's neo-Darwinists, perhaps for fear that any criticism of the evolutionary paradigm will encourage creationists and proponents of intelligent design. In Biological Emergences, Robert Reid argues that natural selection is not the cause of evolution. He writes that the causes of variations, which he refers to as natural experiments, are independent of natural selection; indeed, he suggests, natural selection may get in the way of evolution. Reid proposes an alternative theory to explain how emergent novelties are generated and under what conditions they can overcome the resistance of natural selection. He suggests that what causes innovative variation causes evolution, and that these phenomena are environmental as well as organismal. After an extended critique of selectionism, Reid constructs an emergence theory of evolution, first examining the evidence in three causal arenas of emergent evolution: symbiosis/association, evolutionary physiology/behavior, and developmental evolution. Based on this evidence of causation, he proposes some working hypotheses, examining mechanisms and processes common to all three arenas, and arrives at a theoretical framework that accounts for generative mechanisms and emergent qualities. Without selectionism, Reid argues, evolutionary innovation can more easily be integrated into a general thesis. Finally, Reid proposes a biological synthesis of rapid emergent evolutionary phases and the prolonged, dynamically stable, non-evolutionary phases imposed by natural selection.

Robert G. B. Reid is Emeritus Professor of Biology at the University of Victoria, British Columbia. He is the author of Evolutionary Theory: The Unfinished Synthesis.
Loading...
or
Not Currently Available for Direct Purchase