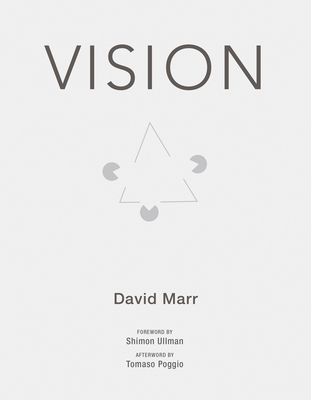 By David Marr, Shimon Ullman (Foreword by), Tomaso A. Poggio (Afterword by)

Available again, an influential book that offers a framework for understanding visual perception and considers fundamental questions about the brain and its functions.

David Marr's posthumously published Vision (1982) influenced a generation of brain and cognitive scientists, inspiring many to enter the field. In Vision, Marr describes a general framework for understanding visual perception and touches on broader questions about how the brain and its functions can be studied and understood. Researchers from a range of brain and cognitive sciences have long valued Marr's creativity, intellectual power, and ability to integrate insights and data from neuroscience, psychology, and computation. This MIT Press edition makes Marr's influential work available to a new generation of students and scientists.

In Marr's framework, the process of vision constructs a set of representations, starting from a description of the input image and culminating with a description of three-dimensional objects in the surrounding environment. A central theme, and one that has had far-reaching influence in both neuroscience and cognitive science, is the notion of different levels of analysis--in Marr's framework, the computational level, the algorithmic level, and the hardware implementation level.

Now, thirty years later, the main problems that occupied Marr remain fundamental open problems in the study of perception. Vision provides inspiration for the continuing efforts to integrate knowledge from cognition and computation to understand vision and the brain.

Tomaso Poggio is Eugene McDermott Professor in the Department of Brain and Cognitive Sciences at MIT.
or
Buy Here
Copyright © 2020 American Booksellers Association