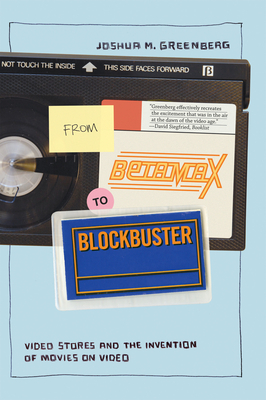 From Betamax to Blockbuster

Video Stores and the Invention of Movies on Video (Inside Technology)

How the VCR was transformed from a machine that records television into a medium for movies.

The first video cassette recorders were promoted in the 1970s as an extension of broadcast television technology—a time-shifting device, a way to tape TV shows. Early advertising for Sony's Betamax told potential purchasers “You don't have to miss Kojak because you're watching Columbo.” But within a few years, the VCR had been transformed from a machine that recorded television into an extension of the movie theater into the home. This was less a physical transformation than a change in perception, but one that relied on the very tangible construction of a network of social institutions to support this new marketplace for movies.

In From Betamax to Blockbuster, Joshua Greenberg explains how the combination of neighborhood video stores and the VCR created a world in which movies became tangible consumer goods. Greenberg charts a trajectory from early “videophile” communities to the rise of the video store—complete with theater marquee lights, movie posters, popcorn, and clerks who offered expert advice on which movies to rent. The result was more than a new industry; by placing movies on cassette in the hands (and control) of consumers, video rental and sale led to a renegotiation of the boundary between medium and message, and ultimately a new relationship between audiences and movies. Eventually, Blockbuster's top-down franchise store model crowded local video stores out of the market, but the recent rise of Netflix, iTunes, and other technologies have reopened old questions about what a movie is and how (and where) it ought to be watched. By focusing on the “spaces in between” manufacturers and consumers, Greenberg's account offers a fresh perspective on consumer technology, illustrating how the initial transformation of movies from experience into commodity began not from the top down or the bottom up, but from the middle of the burgeoning industry out.


Praise For From Betamax to Blockbuster: Video Stores and the Invention of Movies on Video (Inside Technology)…

Greenberg effectively re-creates the excitement that was in the air at the dawn of the video age.—Booklist—

Joshua M. Greenberg is Director of Digital Strategy and Scholarship at the New York Public Library.
Loading...
or
Not Currently Available for Direct Purchase