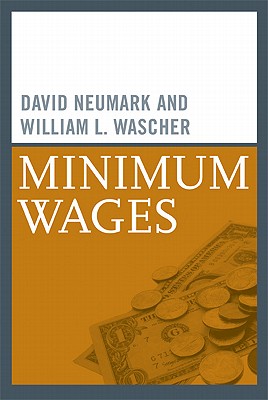 A comprehensive review of evidence on the effect of minimum wages on employment, skills, wage and income distributions, and longer-term labor market outcomes concludes that the minimum wage is not a good policy tool.

Minimum wages exist in more than one hundred countries, both industrialized and developing. The United States passed a federal minimum wage law in 1938 and has increased the minimum wage and its coverage at irregular intervals ever since; in addition, as of the beginning of 2008, thirty-two states and the District of Columbia had established a minimum wage higher than the federal level, and numerous other local jurisdictions had in place "living wage" laws. Over the years, the minimum wage has been popular with the public, controversial in the political arena, and the subject of vigorous debate among economists over its costs and benefits. In this book, David Neumark and William Wascher offer a comprehensive overview of the evidence on the economic effects of minimum wages. Synthesizing nearly two decades of their own research and reviewing other research that touches on the same questions, Neumark and Wascher discuss the effects of minimum wages on employment and hours, the acquisition of skills, the wage and income distributions, longer-term labor market outcomes, prices, and the aggregate economy. Arguing that the usual focus on employment effects is too limiting, they present a broader, empirically based inquiry that will better inform policymakers about the costs and benefits of the minimum wage. Based on their comprehensive reading of the evidence, Neumark and Wascher argue that minimum wages do not achieve the main goals set forth by their supporters. They reduce employment opportunities for less-skilled workers and tend to reduce their earnings; they are not an effective means of reducing poverty; and they appear to have adverse longer-term effects on wages and earnings, in part by reducing the acquisition of human capital. The authors argue that policymakers should instead look for other tools to raise the wages of low-skill workers and to provide poor families with an acceptable standard of living.

William L. Wascher is Senior Associate Director in the Division of Research and Statistics at the Federal Reserve Board.
Loading...
or
Not Currently Available for Direct Purchase