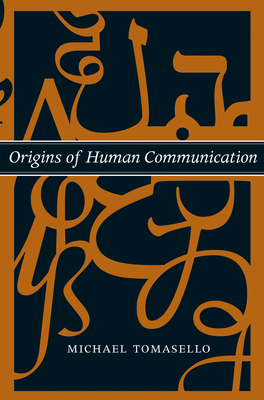 A leading expert on evolution and communication presents an empirically based theory of the evolutionary origins of human communication that challenges the dominant Chomskian view.

Human communication is grounded in fundamentally cooperative, even shared, intentions. In this original and provocative account of the evolutionary origins of human communication, Michael Tomasello connects the fundamentally cooperative structure of human communication (initially discovered by Paul Grice) to the especially cooperative structure of human (as opposed to other primate) social interaction. Tomasello argues that human cooperative communication rests on a psychological infrastructure of shared intentionality (joint attention, common ground), evolved originally for collaboration and culture more generally. The basic motives of the infrastructure are helping and sharing: humans communicate to request help, inform others of things helpfully, and share attitudes as a way of bonding within the cultural group. These cooperative motives each created different functional pressures for conventionalizing grammatical constructions. Requesting help in the immediate you-and-me and here-and-now, for example, required very little grammar, but informing and sharing required increasingly complex grammatical devices. Drawing on empirical research into gestural and vocal communication by great apes and human infants (much of it conducted by his own research team), Tomasello argues further that humans' cooperative communication emerged first in the natural gestures of pointing and pantomiming. Conventional communication, first gestural and then vocal, evolved only after humans already possessed these natural gestures and their shared intentionality infrastructure along with skills of cultural learning for creating and passing along jointly understood communicative conventions. Challenging the Chomskian view that linguistic knowledge is innate, Tomasello proposes instead that the most fundamental aspects of uniquely human communication are biological adaptations for cooperative social interaction in general and that the purely linguistic dimensions of human communication are cultural conventions and constructions created by and passed along within particular cultural groups.

Interdisciplinary perspectives on the concepts of indeterminacy and indeterminability and the distinctions between the two.
Loading...
or
Not Currently Available for Direct Purchase