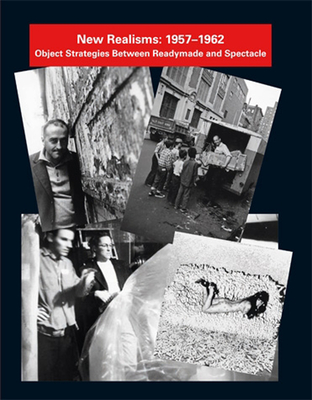 1957-1962: Object Strategies Between Readymade and Spectacle

Works by a pre-Pop, post-abstract expressionist generation of artists who rejected painterly expression and embraced the object.

As the 1950s became the 1960s, a new generation of artists around the globe rejected direct painterly expression and returned decisively to the object. Moving away from abstract expressionism and toward the sensibility that would become Pop, these artists--among them Raymond Hains, Martial Raysse, Yves Klein, Daniel Spoerri, Jean Tinguely, and Robert Rauschenberg--effectively established a new set of artistic paradigms that would influence the decade ahead. New Realisms: 1957-1962 maps this international field of artistic practice, showcasing more than 200 works by artists of the period. The title echoes the name of the French movement of the 1960s "Nouveau R alisme." Indeed, the work of the Nouveaux R alistes group anchors the book (and the exhibition it accompanies), but at the same time, New Realisms represents a wider range of related instincts, diversely expressed. The emphasis is on a constellation of activities in play before the new critical terms and categories of Pop Art were set in stone. The book views the emerging artistic scene from the other end of the telescope, as it were: from a European perspective rather than from that of American Pop Art. New Realisms is emphatically hybrid, encompassing the initiatives of the French group as well as trajectories in New York that stretched from painting to "Environment" to Happening.

Distributed by the MIT Press for the Reina Sofia Museum