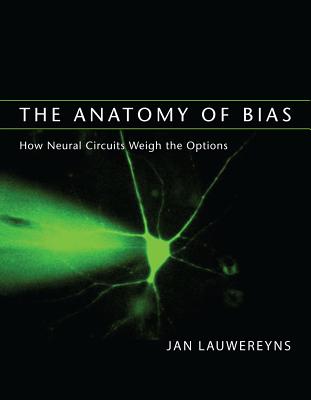 The Anatomy of Bias

How Neural Circuits Weigh the Options

An integrative account of the neural underpinnings of decision making, emphasizing the ways in which some information sources are given more weight than others.

I will recklessly endeavor to scavenge materials from these various fields with the single aim of producing a coherent, but open-minded account of attention, or bias versus sensitivity, or how the activities of neurons allow us to decide one way or another that, with a faint echo of Hamlet in the background, something appears to be or not to be.--from The Anatomy of Bias.

In this engaging, even lyrical, book, Jan Lauwereyns examines the neural underpinnings of decision-making, using bias as his core concept rather than the more common but noncommittal terms selection and attention. Lauwereyns offers an integrative, interdisciplinary account of the structure and function of bias, which he defines as a basic brain mechanism that attaches different weights to different information sources, prioritizing some cognitive representations at the expense of others. Lauwereyns introduces the concepts of bias and sensitivity based on notions from Bayesian probability, which he translates into easily recognizable neural signatures, introduced by concrete examples from the experimental literature. He examines, among other topics, positive and negative motivations for giving priority to different sensory inputs, and looks for the neural underpinnings of racism, sexism, and other forms of familiarity bias. Lauwereyns--a poet and essayist as well as a scientist--connects findings and ideas in neuroscience to analogous concepts in such diverse fields as post-Lacanian psychoanalysis, literary theory, philosophy of mind, evolutionary psychology, and experimental economics. With The Anatomy of Bias, he gives readers that rarity in today's world of proliferating and ever more narrowly focused technical research papers: a work of sustained, rational thinking, elegantly expressed.

Jan Lauwereyns is a Professor in the Graduate School of Systems Life Sciences at Kyushu University in Japan and Adjunct Research Associate in the School of Psychology at Victoria University of Wellington in New Zealand. He has published articles in journals including Nature, Journal of Neuroscience, and Trends in Cognitive Science as well as poetry, fiction, and essays.
Loading...
or
Not Currently Available for Direct Purchase