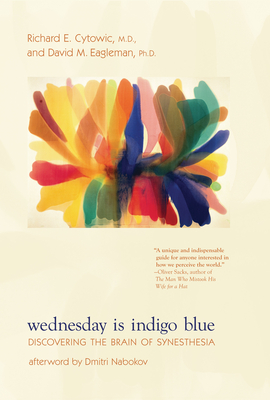 Discovering the Brain of Synesthesia

How the extraordinary multisensory phenomenon of synesthesia has changed our traditional view of the brain.

A person with synesthesia might feel the flavor of food on her fingertips, sense the letter "J" as shimmering magenta or the number "5" as emerald green, hear and taste her husband's voice as buttery golden brown. Synesthetes rarely talk about their peculiar sensory gift--believing either that everyone else senses the world exactly as they do, or that no one else does. Yet synesthesia occurs in one in twenty people, and is even more common among artists. One famous synesthete was novelist Vladimir Nabokov, who insisted as a toddler that the colors on his wooden alphabet blocks were "all wrong." His mother understood exactly what he meant because she, too, had synesthesia. Nabokov's son Dmitri, who recounts this tale in the afterword to this book, is also a synesthete--further illustrating how synesthesia runs in families.

In Wednesday Is Indigo Blue, pioneering researcher Richard Cytowic and distinguished neuroscientist David Eagleman explain the neuroscience and genetics behind synesthesia's multisensory experiences. Because synesthesia contradicted existing theory, Cytowic spent twenty years persuading colleagues that it was a real--and important--brain phenomenon rather than a mere curiosity. Today scientists in fifteen countries are exploring synesthesia and how it is changing the traditional view of how the brain works. Cytowic and Eagleman argue that perception is already multisensory, though for most of us its multiple dimensions exist beyond the reach of consciousness. Reality, they point out, is more subjective than most people realize. No mere curiosity, synesthesia is a window on the mind and brain, highlighting the amazing differences in the way people see the world.

Richard E. Cytowic, M.D., MFA, a pioneering researcher in synesthesia, is Professor of Neurology at George Washington University. He is the author of Synesthesia: A Union of the Senses, The Man Who Tasted Shapes, The Neurological Side of Neuropsychology and (with David M. Eagleman) the Montaigne Medal-winner Wednesday Is Indigo Blue: Discovering the Brain of Synesthesia, all published by the MIT Press. David M. Eagleman, Ph.D., is a neuroscientist at Baylor College of Medicine, where he directs the Center for Synesthesia Research.
Loading...
or support indie stores by buying on