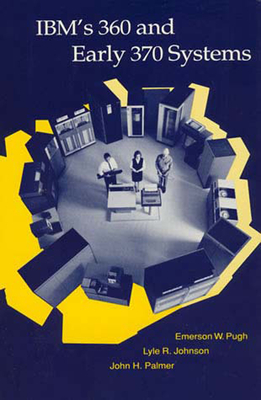 IBM's 360 and Early 370 Systems describes the creation of this remarkable system and the developments it spawned, including its successor, System/370.

No new product offering has had greater impact on the computer industry than the IBM System/360. IBM's 360 and Early 370 Systems describes the creation of this remarkable system and the developments it spawned, including its successor, System/370. The authors tell how System/360's widely-copied architecture came into being and how IBM failed in an effort to replace it ten years later with a bold development effort called FS, the Future System. Along the way they detail the development of many computer innovations still in use, among them semiconductor memories, the cache, floppy disks, and Winchester disk files. They conclude by looking at issues involved in managing research and development and striving for product leadership. While numerous anecdotal and fragmentary accounts of System/360 and System/370 development exist, this is the first comprehensive account, a result of research into IBM records, published reports, and interviews with over a hundred participants. Covering the period from about 1960 to 1975, it highlights such important topics as the gamble on hybrid circuits, conception and achievement of a unified product line, memory and storage developments, software support, unique problems at the high end of the line, monolithic integrated circuit developments, and the trend toward terminal-oriented systems. System/360 was developed during the transition from discrete transistors to integrated circuits at the crucial time when the major source of IBM's revenue was changed from punched-card equipment to electronic computer systems. As the authors point out, the key to the system's success was compatibility among its many models. So important was this to customers that System/370 and its successors have remained compatible with System/360. Many companies in fact chose to develop and market their own 360-370 compatible systems. System/360 also spawned an entire industry dedicated to making plug-compatible products for attachment to it.

The authors, all affiliated with IBM Research, are coauthors of IBM's Early Computers, a critically acclaimed technical history covering the period before 1960.