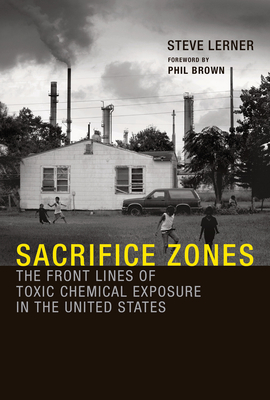 The Front Lines of Toxic Chemical Exposure in the United States

The stories of residents of low-income communities across the country who took action when pollution from heavy industry contaminated their towns.

Across the United States, thousands of people, most of them in low-income or minority communities, live next to heavily polluting industrial sites. Many of them reach a point at which they say "Enough is enough." After living for years with poisoned air and water, contaminated soil, and pollution-related health problems, they start to take action--organizing, speaking up, documenting the effects of pollution on their neighborhoods.

In Sacrifice Zones, Steve Lerner tells the stories of twelve communities, from Brooklyn to Pensacola, that rose up to fight the industries and military bases causing disproportionately high levels of chemical pollution. He calls these low-income neighborhoods "sacrifice zones." And he argues that residents of these sacrifice zones, tainted with chemical pollutants, need additional regulatory protections.

Sacrifice Zones goes beyond the disheartening statistics and gives us the voices of the residents themselves, offering compelling portraits of accidental activists who have become grassroots leaders in the struggle for environmental justice and details the successful tactics they have used on the fenceline with heavy industry.

Steve Lerner is Research Director of Commonweal, a health and environment research institute. He is the author of Eco-Pioneers: Practical Visionaries Solving Today's Environmental Problems (1998) and Diamond: A Struggle for Environmental Justice in Louisiana's Chemical Corridor (2005), both published by the MIT Press.
Loading...
or
Not Currently Available for Direct Purchase