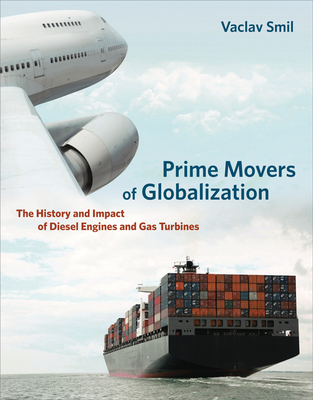 The History and Impact of Diesel Engines and Gas Turbines

The story of how diesel engines and gas turbines, used to power cargo ships and jet airplanes, made today's globally integrated economy possible.

The many books on globalization published over the past few years range from claims that the world is flat to an unlikely rehabilitation of Genghis Khan as a pioneer of global commerce. Missing from these accounts is a consideration of the technologies behind the creation of the globalized economy. What makes it possible for us to move billions of tons of raw materials and manufactured goods from continent to continent? Why are we able to fly almost anywhere on the planet within twenty-four hours? In Prime Movers of Globalization, Vaclav Smil offers a history of two key technical developments that have driven globalization: the high-compression non-sparking internal combustion engines invented by Rudolf Diesel in the 1890s and the gas turbines designed by Frank Whittle and Hans-Joachim Pabst von Ohain in the 1930s. The massive diesel engines that power cargo ships and the gas turbines that propel jet engines, Smil argues, are more important to the global economy than any corporate structure or international trade agreement. Smil compares the efficiency and scale of these two technologies to prime movers of the past, including the sail and the steam engine. The lengthy processes of development, commercialization, and diffusion that the diesel engine and the gas turbine went through, he argues, provide perfect examples of gradual technical advances that receive little attention but have resulted in epochal shifts in global affairs and the global economy.

Vaclav Smil is Distinguished Professor Emeritus at the University of Manitoba. He is the author of forty books, including Energy and Civilization, published by the MIT Press. In 2010 he was named by Foreign Policy as one of the Top 100 Global Thinkers. In 2013 Bill Gates wrote on his website that "there is no author whose books I look forward to more than Vaclav Smil."
Loading...
or
Not Currently Available for Direct Purchase