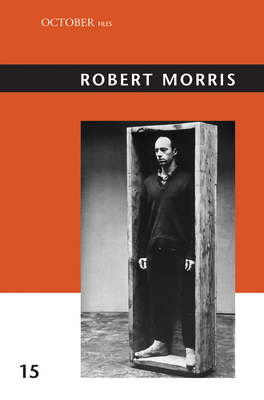 Essays, an interview, and a roundtable discussion on the work of one of the most influential American artists of the postwar period.

This October Files volume gathers essays, an interview, and a roundtable discussion on the work of Robert Morris, one of the most influential American artists of the postwar period. It includes a little-known text on dance by Morris himself and a never-before-anthologized but influential catalog essay by Annette Michelson. Often associated with minimalism, Morris (b. 1931) also created important works that involved dance, process art, and conceptualism. The texts in this volume focus on Morris's early work and include an examination of a 1971 Tate retrospective by Jon Bird, an interview with the artist by Benjamin Buchloh, a conversation from a 1994 issue of October about resistance to 1960s art, and an essay by this volume's editor, Julia Bryan-Wilson, on the labor involved in installing the massive works in Morris's 1970 solo exhibition at the Whitney. Spanning 1965 to 2009, these writings map the evolution of critical thought on Morris over more than four decades.

Julia Bryan-Wilson is Associate Professor of Modern and Contemporary Art at the University of California, Berkeley, and the author of Art Workers: Radical Practice in the Vietnam War Era.
Loading...
or
Not Currently Available for Direct Purchase