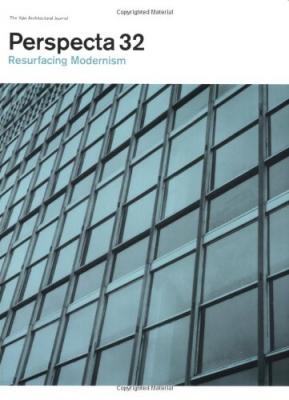 An exploration of mid-century architectural modernism in a postmodern age, and of surface as a subject with depth.

Resurfacing Modernism Founded in 1950, Perspecta is the oldest and most distinguished of student-edited American architectural journals. Perspecta 32 examines contemporary resurfacings represented by the return of many forms and values associated with mid-twentieth-century modernism. By 1950, a plethora of architectural practices were adapting earlier modernist experimentation to the changing times. Numerous buildings of this period employed sleek surfaces of glass, metal, and stone to provide primary stylistic unity. More generally, much architectural activity involved the quotation, manipulation, and modification of past appearances (surfaces) and discourses (spaces). Exceptional architecture of the last decade--not only built work, but also historical and theoretical research--has again been informed by such imagery and actions. For this reason, Perspecta 32 explores the prospects of mid- century modernism in a postmodern age. The issue invokes three different meanings of resurface: the reappearance of aspects of the past as well as the layering of new meanings and interpretations onto accepted conventions, and the peeling away of accrued patinas associated with modernism. While critical explorations of architectural modernism have frequently emphasized surface qualities, the recognition and analysis of surface as a subject with depth presents itself now more than ever.

Ann Marie Brennan is completing her thesis for the Master of Environmental Design Program at the Yale School of Architecture.
Loading...
or
Not Currently Available for Direct Purchase